ANYWAY, ANYHOW, ANYWHERE.
(A song from 1965 and probably the best single ever. More of which later.)

In these febrile times of pandemics and irrationality one needs to get out. I did and it was this song with its optimistic lyric, pounding drum beat and slashing guitar which came into my head to sustain me. I was on a bike and hike adventure uphill and on into a new ‘anywhere,’ My destination was Elsdonburn Shank in the Cheviot foothills. The poem below explains why.

“A new route; couldn’t understand
Why
I had never in the past given it a
Try.
Too close to home
Maybe
When cycling past with other places
To see.

Anyway today to Kilham I cycled
And a delight it was
Too
With left and right
Back and forth
New vistas coming into view.

A bike and hike
Up
To the shank of the Elsdonburn
Then down to Hethpool
Alongside its burble and churn. 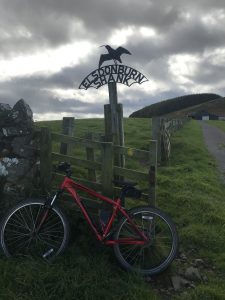 As days passed the lyric took on yet more significance as it and echoed a lot of what I was engaged in. Mid October for example saw me out on Yetholm Loch in my canoe; you could say a new ‘anyway’ to explore a unique ‘anywhere’. Again a short poem came to mind.

The breeze rippled waves
Sway the boat to and fro
With their rhythmic undertow.
Martens and swallows flutter by,
Dipping to sip
As southward they fly.
All is at peace here on the loch,
A welcome retreat from a world in shock. 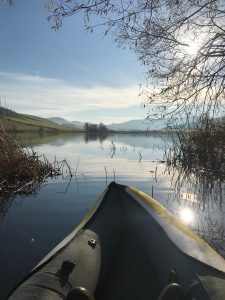 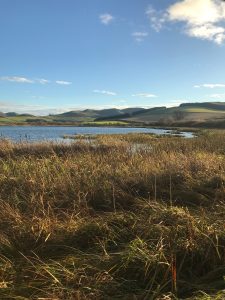 One afternoon, as the leaves were falling, I went to our nearby Chestnut Wood to check out the colours and also to conduct a small survey regarding its origin. If the girth of a tree is measured about six feet up from the ground its age can be determined on the basis that a year of growth is indicated by every inch of the circumference. The big Sweet Chestnuts were 140 years old and planted around 1880, beech a bit later in the 1920’s, while the giant Douglas Fir at the edge of the old mill race dated back to 1850. Now the wood thins out a little as it extends towards Hayhope. It was here that I thought a little rewilding would carry on the fine tradition of tree planting. A hornbeam, hazel and yew are now filling the space: a creative ‘anyway’ gesture to help look to the future. 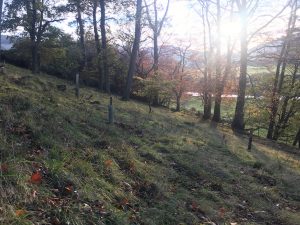 As the photographs show I have protected the saplings with tree recycled tree guards. That is good practice only if they are eventually removed when they have done their job. It is an understatement to say that unfortunately they are usually left to degrade and spread plastic litter all around. This is the case along one of my favourite ,‘anywhere,’ off road cycling routes; the old railways near Cornhill. An earlier tree planting initiative has come to fruition and some delightful ‘holloways’ now arch over the old tracks. The redundant guards though have been left to blight the scene. Along with other passers by, I have made piles of some of them and stripped the trees of yet more. After adding a further 100 to the debris a few weeks ago I have alerted the local Parish Council and Northumberland County Council to the need for their collection: ‘anyhow’ will do! 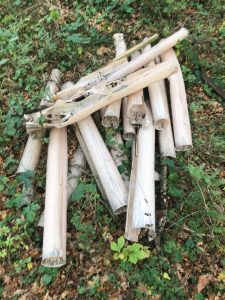 While in the throes of the above process of weaving my immediate world around the lyric of an old pop song something far more serious and important emerged; something which infused the lyric below with grave significance.
“I could go anyway, the way that I choose
I could live anyhow, win or lose
I could go anywhere for something new
Anyway, anyhow, anywhere I choose.”

There are individuals all over the world for whom the freedoms lauded by the WHO lyric are unlawfully denied.

Courtesy of the Guardian I learned more about this by way of the work of English PEN and their ‘PENwrites’ campaign. PEN supports people who are unjustly imprisoned for expressing their views. It does so by encouraging the writing of letters to them. A ZOOM broadcast introduced me to the subjects of PEN’s current campaign. A young woman movingly spoke about the Kurdish writer and filmmaker, Nedim Turfent, imprisoned in Turkey for exposing the plight of Kurdish and Turkish workers. I listened to her heartfelt account of Nedim and read his poem ‘Let my heart give life’, part of which is cited below.
“Your heart has become the earth
let it give elixir into the veins
bring fertility to the soil
from the springs behind the mountain Qaf.
Let the benevolence of the crops
be the silver key of life.
let your heart soothe
the farmer
the peasant
the day labourer
the distressed.

let it massage the broken wings of birds with ointments…….”

My letter of support accompanied by a picture of redwings was duly sent; the first of monthly missives.

An old pop song lyric had been brought to life this month by a whole chain of events. It had resonated with my adventures and reading. Indeed in the process I could recall myself at fifteen, getting the once a week red Slatter’s bus from Combe to Oxford and buying the single from Smiths at a price of around seven shillings and sixpence.. I could recall too tuning in to the TV programme called Ready Steady Go which showcased all the new ‘groups’ every Friday at 6.15. “Anyway,anyhow,anywhere” powered in the programme’s intro. Fast forward a few years to the WHO’s classic album and new lyric and my purchase of their debut song rings particularly true: “I call that a bargain, the best I ever had!”(2)

REFERENCES.
English PEN, Free Word Centre, 60, Farringdon Rd, London. EC1R 3GA
Who’s Next. by the WHO. Lyric from track 2 Side 1