“Day after day, alone on a hill
The man with a foolish grin
Is keeping perfectly still……
……….The fool on the hill sees the sun going down
And the eyes in his head see the world spinning round”

So sang Paul McCartney on the 1967 Beatles E.P. Magical Mystery tour.(1) Here in January 2018 I was up on our favourite hill, Staerough and engaged in dusk time activity which to the distant onlooker might seem odd, if not ‘foolish’. I guess that is why the Beatles classic came back to me. In the gloaming I could have been seen up on the ridge with a big blue rucksack on my back, tools sticking out, and a trussed up stack of wood on my shoulder. Even if there had been someone around to inquire as to what I was doing, my reply would have seemed quirky. “Dismantling an old gate”, would have seemed an unlikely reply even though it was true. “Why”? would have been an obvious question.
In a roundabout way the start of an answer begins with A.E Houseman who too tramped over a favourite hill:

“On Wenlock Edge the woods in trouble:
His forest fleece, the Wrekin heaves;
The gale, it piles the saplings double
And thick in Severn snow the leaves.”(2)

A contemporary ‘Shropshire Lad’, Paul Evans,(3) was up on Wenlock Edge recently enjoying a favourite walk during which he passed a familiar fence post, “old and weathered, a beautiful greenfinch blush of moss and algae.” He went on to say how in the nineteenth century John Clare was also accustomed to a similar encounter near his fenland home except that on one day his own venerable post had been removed. He wrote:
“it hurt me to see it gone for my affections claim a friendship with such things, but nothing lasts in this world.”(4)

In fact this post and his lament was a symbol of the massive losses which were being experienced at that time by virtue of the enclosing of common land. This was a process which the historian E. P. Thompson pointedly sums up as:(5)

“a plain enough case of class robbery, played according to fair rules of property and law laid down by a parliament of property owners and lawyers.”

Clare himself wrote bitterly: “enclosure came and trampled the grave of labour rights and left the poor a slave.”(6)

Some might say that a sensibility which claims a friendship with such things as a post no matter what else it might signify indicates a degree of McArtney alluded foolishness, hill or no hill. That would be harsh. For sure what it does indicate is a person ever ready to immerse themselves in the delights of the natural world. Let Clare speak for himself:(7)

“I love to walk in summer shower
When the rain falls gently down
I love to walk a leisure hour
A distance from the town
To see the drops on bushes hing
And blackbirds prune a dabbled wing.”

All of which brings me back to my retelling of my dusk time hauling for I too like to notice things. Up on Staerough I had noticed not posts but gates; wooden gates through which I had passed many times. 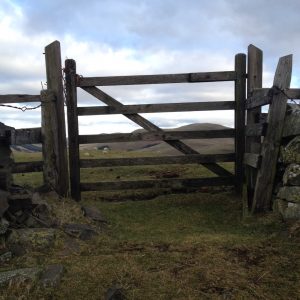 New year walks revealed, however, that they had been replaced by metal gates and cast to one side. Forlorn though they looked, lying there in a mangled heap, their patina of pale green and ochre lichens, rusted hinges and neatly jointed structure all called out for salvage. And as I said that’s what I did. 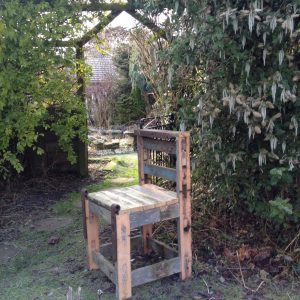 As I set about the task, the noise of sawing was punctuated by a sound from above. From the Scots pine copse below me four buzzards had emerged, soared high and began to call. Clare too had often been in the company of the same; “puddocks” he called them and had enjoyed their “pleasant sound” (8) when they rose high above their own “puddock nook.” Some things then do last in the world. With that in mind I considered what to do with my bounty. Given all the connections it had been party too the solution was clear: refashion it into something else, something durable. The result appears above.

Gary Snyder is a modern poet who follows in the footsteps of Clare. Though his rhymes and rhythms are from a different era, his affinity with and immersion in all things natural is equally intense. In one poem he prefaces his musings with an overall caption “things to do in….” and then sets out his experiences. Adapting this in my nod to a hybrid Snyder/Clare moment I am recording observations in favourites places. “On top of a hill in winter” has prompted the following:

Year’s first snow, wind blown flurry
Fizzing through the bracken
Then all still.
Blues show through
Above the hills
Where a sinking sun blazes bright
Behind the grey cloud rim
Fringing it orange
And lighting the river below
In silver.

Of course engagement with a favoured place can take different forms and still appear as being some what quirky or even foolish to an observer. And so it was earlier this month when five inches of snow fell on Staerough, was whipped into drifts by strong winds and froze. It meant one thing; perfect conditions for the timeless fun pastime of sledging. The hill called out to us. It was apparent though that the blizzard conditions had a limited appeal. There were just five of us out on the tops: Kevin and his fearless young sons and us two foolhardy geriatrics: all fools on the hill having fun. 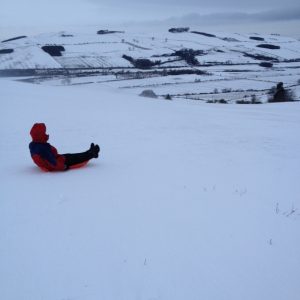