After last week’s re-launch of birdsbikesbuttercups, I discovered a missing link: an article from November 2016. It is posted up today with a post script at the end

Globalization promised much and yet has ultimately delivered its antithesis. Its new internationalism could and should have brought peoples together by harnessing and nurturing the bounties of the planet for the good of all. Instead its bequest was a rapacious exploitation and plundering on behalf of global elites.

Globalization has orchestrated a veritable “tragedy of the commons.” If that is not grave enough then the backlash, as manifested in the USA election and UK referendum, has ignored that tragedy and relegated it to the status of an inconsequential sideshow. Concern for the future of the planet is at an all time low.

The voices of those abandoned by the fall out of global neo liberal economic policies have finally been heard yet while the protest was righteous and justified the resultant vision of an alternative future is grim.

Protest has been hijacked and morphed into racism, xenophobia, misogyny and disdain for our planetary home.

I write this a few weeks after reflecting on an essay by Annie Dillard. In the light of the events referred to above I feel that she offers a tiny, timely and timeless reminder of wisdom we must rediscover. My thoughts appear below.

KILLING TWO BIRDS WITH ONE STONE (OR NOT)

A Guardian Review article asked contemporary ‘nature’ writers to name others who had inspired them. It was Annie Dillard’s essays of 1982(1) which had called out to Kathleen Jamie and inspired her own poems twenty three years on. ‘The Overhaul’(2) of the latter is shaped by “Teaching a stone to talk” by the former. Having enjoyed Jamie I needed to read Dillard, not an instantly available prospect as the out of print essays could only be acquired in the shape of an old library copy imported from America. It proved to be well worth the effort. One piece in particular lingered with me and this essay explains why.

Annie Dillard is a woman, who to borrow the words of Hardy, “notices things,” whether it is mirages, ponds, eclipses or weasels or stones. She has an “eye for mysteries”. (3) Like Hardy before her she takes pleasure in engaging with the natural world. The ‘darkling thrush’ would have called to her in “full hearted evensong of joy illimited” just as it did to him. In her case it is a sensitivity which is deeply rooted in her own North American culture. Autumnal moments so evocatively described by the reclusive Grey Owl would deeply resonate:
“the air was filled with the low sound of falling leaves….And as they came spinning, floating and spiralling down like golden snowflakes, the sound of their continuous, subdued rustling transformed the stately forest into a shadowed whispering gallery, in which it seemed as though the ancient trees would tell in muted accents the age old secrets of days gone by, did one but have the ears to understand.” (4)
Further south in Maine, and some years earlier, Henry David Thoreau was also attuned to the moods of the woods “where the morning wind forever blows; the poem of creation uninterrupted.” before adding in Grey Owl like wistfulness “but few are the ears that hear it.” (5)

‘Reading’ that ‘poem’, straining her ‘ears’ to ‘hear’ and so approach ‘understanding’, is Annie Dillard’s quest. Her essay, entitled ‘Sojourner,’ is testament to that endeavour. In tight, telling prose she takes us to the Galapagos islands with their mangrove fringed shores. It is not, however, the stellar cast of bird and animal life at the ocean’s edge which grabs her and sets her thinking. Rather it is their arboreal fringe of the ubiquitous mangrove. We learn from her how the tree grows, proliferates fruit and migrates. Migrates? Well, yes, but how?
“Seeds germinate, drop onto a dab of floating muck. The heavy root end sinks, a leafy plumule unfurls. The tiny seedling, afloat, is on its way.” Debris, guano, bacteria all collect around the roots, thickening the platform of soil, in which fresh water is accumulated and “ a society grows, interlocked in a tangle of dependencies; the tiny tree on its island, shrimps in its toes, terns in its hair.”

And so what do we have? A living entity; sometimes at the mercy of hurricane whipped waves or adrift, slow paced, caught in a doldrum moment. Either way the mangrove is always on the move, a ‘sojourner’, amidst a watery world. This constant partaking of a temporary sojourn is the essence of the mangrove which intrigues Dillard. It is a specific quality which goes on to inspire further reflection.

Humankind; us: “we”, she says, with our life span, are all sojourners too of course moving through our life phases, and often passing, from place to place. And earth itself?: likewise a “sojourner in airless space,” “ a wet ball flung across nowhere.” “ a spaceship” in the cosmos. In these terse and telling phrases Dillard takes the sojourn emblem to a sobering even “despairing” drifting coda of meaninglessness.

There was enough going on in 1982 for such reflections to strike home; cruise missiles and nuclear standoffs to name just one prospect. Just re read Raymond Briggs’s “When the wind blows” (6) for a reminder. Now thirty four years on, we face that and more. These are grim times, a spectre is looming, as each passing week’s ‘news’, global and local, confirms. Self induced climate change with its rising oceans, melting ice caps, mass extinctions, and our reckless ‘anthropocene’ accretions (7) are making us rotating ‘debris’, planetary flotsam. This unrelenting tide of accumulated mishaps shows no sign of turning. We can indeed appear to be randomly drifting all at sea.

When, however, Dillard exclaims, enigmatically that “ we could do worse” than her mangrove metaphor, this nomadic ocean goer”, one is left puzzled. What could be worse than this image of directionless drift and its self destructive legacy? The clue is tied to the makeup of the mangrove island. For Dillard it holds “the possibilities of beauty” for humankind. The island is adrift for sure but as a living entity. It has evolved from the most precarious of beginnings, a single seed alighting on floating ‘muck’, generating a life force. Chance couplings create a complete ecosystem, a living thing, interdependent,, mutually supportive and enriching: in short, a ‘society’.

Could human kind emulate such a phenomenon? We too “started small and have since accumulated a great and solacing muck of soil, human culture”, she reminds us .Could it mould itself to such “a beautiful end?” and “turn drift to dance”. And there she leaves it; at the edge of our inescapable humanity with its potential to imagine, to make meanings afresh. Others take up the idea.

Collective reflexivity is the power, the capacity to effect a re-definition of how we live. Current hegemonies and the dread they induce, however deadening they may appear, can for some yet contain a seed of hope. As Kierkegaard (8) observes “dread can be a serviceable spirit [for] one may liken dread to dizziness. He whose eye chances to look down at the yawning abyss becomes dizzy. But the reason for it is just as much his eye as it is the precipice.” Therein lies the promise; the potential. Humankind can acknowledge the abyss it has created, confront the dread , own its culpability and forgive, thereby undoing the deeds of the past. In doing so a new enlightened path could be embarked upon. Let us remember, initiating action, beginning afresh is “the one miracle making faculty of man” (9). It opens the door to collective heroism and to act in a newly principled manner. We all need to take heed but where to start? The abyss can seem too deep.

If “stones “ and Dillard did converse what might have been their solution. Well for me, I believe that the outcome was a call for a heightened awareness of the commonplace and seeing beauty in the specific. For Dillard it was the story of the humble mangrove which shone light into the abyss and commenced her first small steps to what could be a collective re-imagining.
Kathleen Jamie too follows the same path. She begins a poem with:

“Imagine we could begin
all over again; begin

from the Scots pines
their red ochre, burnt – earth glow.”(10)

Those pines with their “earth glow” where “black rooks… mites of darkness……returning to their pine -copse roost” ; such are the everyday moments we need to savour, conserve and learn from. The quality of our earthly sojourn demands it. Life forms depend on it.

Take just one tiny specific illustration of what needs to be done, indeed which could be easily done, as a step towards that end. Snipe and woodcock are two amazing, beautiful birds: warm brown plumage, fast zig zag flight, and wondrous music making ability with their vibrating tail feathers. Lamentably these birds are a target for gun owners. Result? Over the past 25 years woodcock numbers are down 76% and snipe 87%. Does it have to be this way?

One might ask “can we not turn away from speculative star gazing and planetary exploration and take a hard look at the slaughter of life forms on our own planet earth? Surely, the consequences of our self inflicted losses catastrophically dwarf any elusive gains we might hope to find.

People who “noticed things” was our starting point. Being sensitised to specific forms of the natural world and what they say about all life was their underlying theme. For me it offers a way forward, beyond the contemporary human malaise. A simple illustration was presented. It could be summed up in a re-jig of the title of Dillard’s collection of essays and the old saying we started out with.
“Two birds, one stone, no killing.”
We need to start somewhere.

Last month, nearly two years after my first reading of her works, Annie Dillard’s words came back to me.(1) Where? Amidst the quiet expanse of rural Berwickshire, I encountered some ‘stones’ who seemed to have something to say. I was out and about when I spotted a grouping of unusual statuesque shapes on a hillock about one mile from the road. I set off to explore. As I approached them up a gentle incline five large forms came slowly into full view. 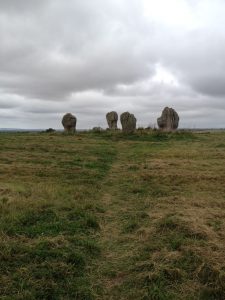 I had discovered the Duddo stones, a burial circle dating back to the Bronze age. The site for the erection of these five to ten feet high stones had been exceedingly well chosen. From within I was struck by the vastness of their wrap a round vista. Away in the distance, the Cheviots, Lammermuirs and Eildon hills hugged the skyline.
The stones were embracing the natural world around them and ‘spoke’. “We are symbols of timelessness. We were placed here. Our fissured, cupped faces tell of the human reverence for what has gone before. We are symbols of human kinds’ earthly sojourn”. 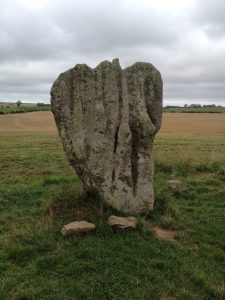 “Look at us and listen”, was their message. Re-discover that reverence and nurture all that we have looked out on and beyond. Time is running out.”