“The world is too much with us late and soon”. Back in April I drew on these words by Wordsworth to encapsulate the feeling of being overwhelmed by our contemporary malaise. Now in October I draw on them again as his words carry even greater foreboding.
All the evidence one would need to illustrate the point is contained in a single day’s newspaper. From Covid mishandling, climate change acceleration, censorial shifts from hard right to far right, our governments proposed abuse of human rights, and the desecration of the natural world: all are pinpointed in the Guardian on October 1st.
2020 is truly a global and national disaster.

How sobering it is then to have reached my personal milestone in such a grim year and to be reminded of its significance in the words of Houseman:
“Now of my three score years and ten”(1) none will come again and for Simon and Garfunkel’s lyric of 1967 to compound the feeling .
“How terribly strange to be seventy”.(2)

How then to begin to cope with these strange, doom laden times for those of us of advancing years? Companionship and togetherness has been our foundation, enhanced at times for us by spells of dog minding. For a few weeks our daughter’s dog, Scruff, has come to stay. This one year old had us up at 7.00am, alive and kicking, eager to get out for the first of his three daily adventures. Not over keen to come to heel when on the scent of rabbits or pheasants, he was a bit of a tearaway loose cannon. Still he eventually found us and in the end achieved a developmental milestone. Water averse until his stay with us , this Portuguese Water Dog discovered his identity with forays into the Bowmont. 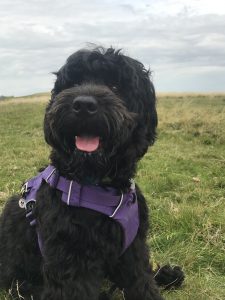 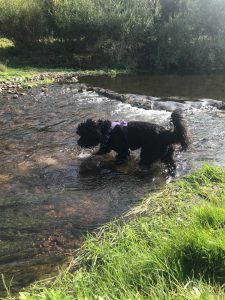 What else emerged over the year to temper the endemic anomie? A T.V. programme featuring the potter and artist Grayson Perry provided a bright spot and inspiration. While inviting viewers to be creative and share their work, he led by example and set about creating a large sculpture adding bits each week. An avid collector of bits and bobs he affixed these to a clay edifice which ultimately metamorphed into a fantastical figure. I just had to have a go, albeit in a small scale way. Shells, stones, and fossils, assorted ‘loose ends’ awaiting a home, gleaned from near and far, were incorporated into wooden formers; the first by way of glue onto a platter turned on the lathe, the second by immersion in resin filled recesses turned into the faces of a box.
Two efforts at creative escapism then as you can see below. 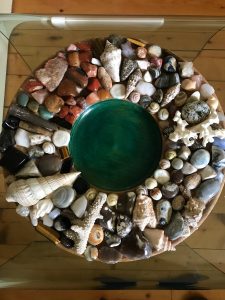 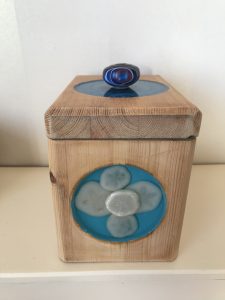 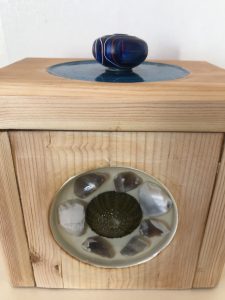 David Hockney also felt inclined to try and help lift the gloom. From his home in Normandy, he invited people of all ages to lift their spirits by painting pictures of spring. He promised to share all submissions in an on line exhibition. Inspired by his initiative, by daffodils from the garden and bluebells in a College valley wood I sent off the two pictures below. Just a bit more creative escapism. 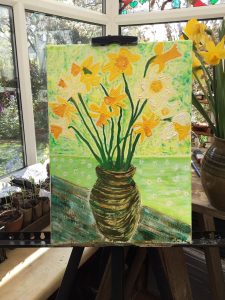 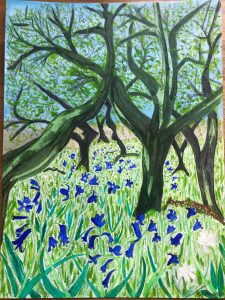 Lockdown, especially in the earlier dark days, saw us confined to home drawing on resources close to hand. For those of us aged seventy this probably meant delving into a library of old vinyl albums (formerly known as records!) I could hardly believe that I had amassed nine albums by a somewhat obscure American west coast singer songwriter by the name of Dan Fogelberg. Leisurely listening all the way back down memory lane saw long lost lyrics brought back to my mind and in turn prompt a final creative effort.

“And the chords struck at birth
Grow more distant
Yet we strike them again and again
And we plead and we pray
For a glimmer of day
As the night folds its wings and descends
Exposing the loose ends.”(3)

It occurred to me while listening to this that my own ‘loose ends’ were in the form of poems written over the years. If ever there was a time to get them together “and give them a glimmer of day” it was now. So I did and while in the process I complemented them with a few mixed media illustrations. The slim volume is pictured below along with some of its pictures. 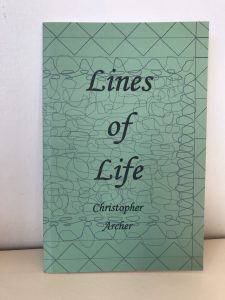 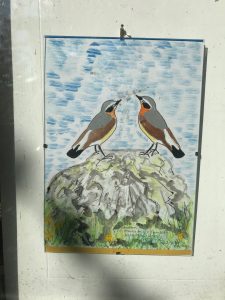 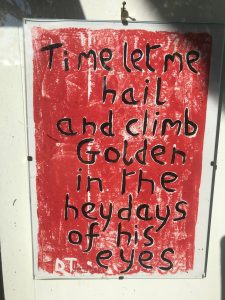 There it is then. My short account of a personal response to a dire year. How are spirits to be sustained from here on in? Small scale re-wilding in the spirit of Jean Giono, ‘the man who planted trees’ (4) is to be a first step. If any reader would like to join me in this get back to me by e mail to christopharch@gmail.com. For anyone interested I would send the a copy of ‘Lines of Life’ (5) in exchange for a small donation. Monies would be used to purchase young trees which I will plant here in the Bowmont valley.

Meanwhile in a reflective act of silent protest I intend to re-read the Rights of Man by Tom Paine and the writings of William Morris. The former was an inspiration for the American struggle for independence, the latter an advocate of creative, humane ways of working. How in an open society could such seminal works be prohibited? (6)That though is the position we find Britain to be in today. It has stirred one observer to put us all on red alert: such censorship shows “how easy it is to lose a country, to slip surreptitously into totalitarianism.” (7)