From ‘singles’ to ‘albums’
From caterpillars to chrysalids
And some lessons learned.

With a little imagination metamorphosis can be applied to diverse forms of life from the obvious to the unlikely. Anyway that is what I will try and show. Let’s start with a reflection on the latter.
Back in the 1960’s my brother Nick and I were the proud owners of a record player and about ten ‘single’ records. These ‘discs’ revolved at 45 rpm and could be stacked above the player’s turntable on a slender spindle. The records would then be dropped down in turn and their recorded music played. Records cost about seven shillings and sixpence. This was a lot of money for teenagers and hence a collection was built up very slowly. The consequence of this was that the songs on both sides of the disc were played over and over again and are hence still totally remembered. This is what we were listening to, a lot!
She Loves You by the Beatles
I want to hold your hand by the Beatles
Please please Me by the Beatles
Rhythm of the rain by the Cascades
Please don’t ever change by the Crickets
It might as well rain until September by Carole King
Swiss Maid by Del Shannon
Just one Look by the Hollies.

The Beatles were of course our favourite ‘group’ with the Hollies our second. Strange as it might seem this flash back in time to our very first musical collection and recollections of the Hollies in particular was kickstarted by some recent articles in the Guardian about child behaviour, language and the natural world. Before I try and spell out, this seemingly, tenuous connection, here is a bit more about the Hollies. One member of this four piece ‘group’ was Graham Nash. After helping create a series of memorable pop songs of which ‘Just one look’ was my favourite, he was lured away to the delights of West coast America by two musicians, Stephen Stills and David Crosby. Together they formed Crosby, Stills and Nash. It proved to be a very creative trio and their first album became a firm favourite. A year later in 1970 they were joined by Neil Young and recorded an even bigger favourite entitled Deja Vu. Graham Nash had metamorphosed from tuneful Mancunian popster to a wistful, melodic hippy sage and from the short and sweet single ‘ 45’ record to the opus of a ‘ 33rpm’ ‘album’!

It was his track on ‘Deja Vu’, entitled “Teach your Children”, that has triggered this current musing. Why? Well recent surveys of modern language and child behaviour have revealed some disturbing things. Apparently, “children are no longer playing in the fields and woods and parks where their parents played and they are losing contact with nature.” ‘Stranger danger’ and the powerful attraction of ubiquitous electronic devices has meant that children are “retreating back into the home.” and are thus prey to a “nature deficit disorder”. (1)
Moreover wider society has further exacerbated this trend by narrowing the vocabulary available to explore that disappearing world. A 2007 analysis of the Oxford Junior Dictionary revealed that fifty words associated with the natural world had been deleted from the book or had been re interpreted. A telling example of this is that the word blackberry is defined exclusively as referring to a mobile phone. It is no longer connected to the fruit of the wild bramble. (2) Such trends cause consternation for some because if “children are not aware of or interested in the natural world they will be less likely to grow up as its defender.” (3)

It was reading this that brought Graham Nash’s tune and lyric to mind. Surely with environmental degradation being reported on a daily basis we need to remedy this generation’s appalling neglect by empowering the next. Overly alarmist? No. Take just this recent headline; ‘butterfly survey reveals decline in 70% of species in the past year.” (4) So we do indeed need to “teach our children well”. The good news is that children are willing collaborators. Last September my daughter and granddaughter were visiting. A walk around the garden revealed scores of green caterpillars munching their way through nasturtium leaves. The six year old was fascinated so her aunt made an indoor garden in an empty aquarium for the child to fill with caterpillars. Over the following weeks a regular supply of nasturtium leaves saw the caterpillars grow and culminate in their metamorphosis. Thirty chrysalids filled the container waiting for the winter to pass. The seven year old child was intrigued.

Recent warm March days brought the cycle to its timely conclusion and I was able to record the hatching and flight of the large white butterflies which had emerged from their speckled casing. They filled the green house before flying out where inviting daffodils awaited. Photographs of the moment were sent off.
Result? One delighted child with living proof of her connection to the wonders of the natural world and a garden full of butterflies. Moral? As Graham Nash advised us: try and “teach your children well”.

Such was the power of seeing the metamorphosis completed I recorded it thus:

Sunny, still
A day full of warmth
And daffodils.

Inside the greenhouse
Over wintered chrysalids
Feel it too.

A wriggle and split
And from the speckled husk
Comes the flutter
Of a white butterfly.

The open window beckons
And it is out and up into the spring air,
The scent of the daffodils draws it there.
Then down into the golden cup,
Proboscis unfurled, to take a sup
Of its nectar.

A new year of life has begun. 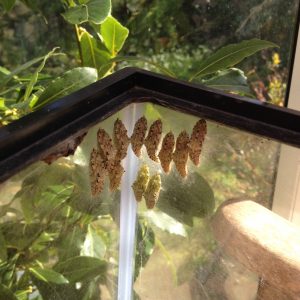 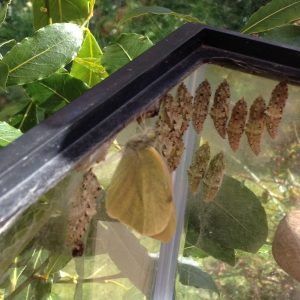