“Expounding a positive vision should be at the centre of attempts to protect the things we love. An ounce of hope is worth a ton of despair.” (Monbiot. G. Guardian. 7/6/14)

For George Monbiot the natural world is in a dire state, beleaguered on all fronts. Anyone empathising with its plight cannot help but feel, as he puts it, “a ton of despair”. Is there any evidence of a ‘counterweight’, however small, which offers the hope which all naturalists crave?
Well, here in my patch on the border of Scotland and England I have recently witnessed signs ; two mini instances of the benefits of re-wilding. Rainfall patterns over the past two years have resulted in a hollow at the foot of the Cheviot hills being permanently flooded. This expanse of shallow water about a hundred yards long and fifty yards wide, stands beside the Yetholm to Morebattle road near the farm known as Crookedshaws. It is currently home to a small flock of lapwings. This is a bird which has suffered a dramatic decline in numbers due to wetland drainage and other farming practices. On July 21st this year I observed ten lapwings or peewits as they are also known.Some were wading looking for food others standing still and erect on one leg. The birds’ elegant crests were visible, their marbled green backs, orange buff rumps,all vivid and clear in the afternoon light. Each bird was a mini statue, perfectly mirrored in the pool, itself coloured a deep luminous green by its reflection of the surrounding hills. When wings were somewhat lazily unfurled for a short flight their trademark black and white plumage along with the birds’ distinctive plaintive ‘peewit’ call completed a distinctive presence. What had emerged over two years to be a special site for this increasingly rare bird had treated me to a special sight. It fostered that ‘ounce of hope’ and offered a general message; conserve newly flooded hollows and welcome in return its lost residents. 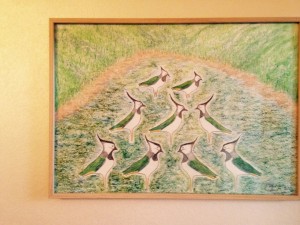 Lapwings in shallow pool near Crookedshaws.

Further weight to to this plea for benign re-wilding was provided a month later. On a warm sunny afternoon, I walked alongside the Bowmont river from Town Yetholm to Kirk Yetholm. The Bowmont is an unruly, shallow river which wanders over a wide flood plain. The result of seasonal spate and meandering is that huge amounts of gravel and stones are deposited on its banks. In order to stabilise this flooding these pebbled margins have been fenced off in places and on the slightly higher ground away from the river, trees and shrubs planted. Cattle and sheep no longer graze there. The result is that a unique zone, about a hundred to two hundred yards wide on both banks, has been left to its own devices and for a re-wilding to commence. My walk on a quiet August afternoon revealed snipe, goldfinches, and a whitethroat all to be at home there. What struck me most of all, though, was the gay abandon with which flowers and shrubs had naturalised the area. Broom, gorse, teasels, mullein, ragwort, willow herb and agrimony stretched all the way along and into the distance; a floral sea five feet deep with waves of purple, mauve, pink and yellow. Overall, I counted thirty different flowers and shrubs. A peacock and red admiral butterfly fluttered above it. For me it was a further instance of the fruits of re-wilding and as such a tangible upward tilting of the scales which Monbiot alludes to. It added another ounce of hope towards that vision of what could be achieved if nature was let back into the world.