“SO, GOING FORWARD, LET US BE CLEAR”, (such is the parlance of the day) just because I am seventy one years old, white and have a pension it does not automatically follow that I am an inveterate supporter of the current U.K government. Perish the thought. In fact my longevity allows me to view the current administration from a unique perspective. The situation, however, is so dire that such a perspective requires the assistance and levity of black humour and an input of sardonic lyrics. The latter requirement will be no surprise to subscribers to my posts. Step forward then a master of yesteryear, the sadly deceased Warren Zevon.
His final album contains the song “Disorder in the House”(1) and is thus an apt metaphorical depiction of the UK today. Here are four of the ten verses;

“Disorder in the house
The tub runneth over
Plasters falling down in pieces by the couch of pain.

Disorder in the house
There’s a flaw in the system
And the fly in the ointment ’s gonna bring the whole thing down.

The floodgates are open
We’ve let the demons loose
The big guns have spoken
And we’ve fallen for the ruse.

It’s the house of the brave and the land of the free
Where the less you know the better off you’ll be.”

Death toll from Covid, nuclear proliferation, trashing of international agreements, curmudgeonly treatment of our nurses and the poor, the disintegration of the UK, the rank cronyism, cuts to foreign aid, appalling treatment of asylum seekers, one could go on but the picture is already clear, pathological disorder.
An earlier Zevon song was entitled “Werewolves of London”. (2) Fast forward to now and it’s as if such “ a shape shifting creature” stalks the corridors of power in broad daylight. “Better not let him in” sang Warren but we did. You know who I’m talking about! And now what? Borrowing from Zevon one last time, withdrawal into “Splendid Isolation” is tempting:

Necessary lockdowns have of course reinforced this understandable response. So what has come of this phase of life? Well for me a burst of creative effort, prompted by two masters, which has brought relief from the daily news and moreover with a heartening unforeseen consequence.

David Hockney studied a tree lined lane in Yorkshire and recorded its seasonal changes. I thought I would do the same from a look out point in my nearby wood. Two views were chosen from my watching place and so the eight mixed media renditions appear below. 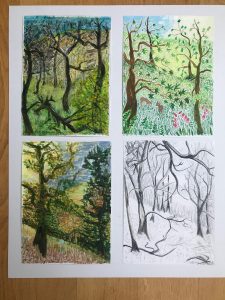 Grayson Perry is a renowned potter. Over the past year he and his wife Philippa have responded to lockdowns with the creation of their TV art club. Fellow artists and the general public have been invited to submit works inspired by a weekly theme. By general consent this has caught the imagination and stimulated creativity throughout the country. My collage effort on the theme of travel appears below. It needs a close up look to see that it is a picture of travel by canoe around my local loch. 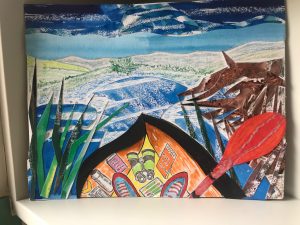 By having a go then and joining in with a wider world has offered some respite from the general gloom I’ve recorded above. A little proactivity can go a long way. I was made aware of this when a letter arrived this week out of the blue. It was a Christmas card, forwarded to me by PEN International, from a Turkish prison. It was sent by a poet and film maker imprisoned there whom I had written to a number of times. It was apparent from what he wrote that such a small act as letter writing can mean a lot and make a difference. At the very least exchanging letters means his prison is not entirely closed.

Splendid though it can be, isolation even in the darkest of times can only get one so far. Helen Macdonald in her essay entitled ‘Symptomatic’( 4 ) exemplifies the point in the most telling manner. She concludes with this;

“There are actions we can take that seem impossible and pointless and yet they are entirely , and precisely, and absolutely required…….Even if change seems an impossibility. For even if we don’t believe in miracles, they are there, and they are waiting for us to find them.”