At a young age, I became a woodwork enthusiast. Why? Well, with Dad being a self employed builder, decorator and carpenter the scene was well set. Moreover, when he brought home a small prefabricated shed and re-erected it in our back garden, a new world became available. It became my domain and hence a few tools followed along with lots of wood offcuts to work on. From age twelve, Sunday afternoons resounded with the sounds of sawing, hammering, and Alan Freeman’s ‘Pick of the Pops’. With Gerry and the Pacemakers singing “I like, I like it”, bird boxes, a bird table and buggies mounted on old pram wheels were all created. This was all given a timely boost by my new woodwork teacher at Chipping Norton School. ‘Spriggy’ Jefferies was his name and he noted on my school report my “keen interest”. Although I was never top of the class (that honour went to my friend Mick my “high standards” always saw me in the top three. My ‘dibber’ from 1962, marked 18/20 and constructed with a mortice and tenon joint, remains in pride of place in my workshop today. Such is the lifelong influence of a good teacher. Early teenage years, then, were spent in the shed woodworking with Pick of the Pops on the ‘tranny’. The early Beatles singles, dave Clark Five, Acker Bilk, Cilla and Dusty all came and went as time passed, along with the woodwork too. By 1968 the only ‘knocking on wood’ in life came from Eddie Floyd’s track from the classic “This is Soul” record, as new vinyl sounds, fashion and discos took over leisure time. Still the seed had been set, the die cast. There was one relic from that time which was to help the future reawakening.
Our village of Combe was gathered around a large green, which was flanked on one side by seven mature elm trees. They were an awesome sight. By the end of the 1960’s however they had all succumbed to the Dutch Elm disease and had been felled. Somehow Dad had obtained a memento of these magnificent trees, a single board measuring 20inches x 30inches x 2 inches. It was stashed away in the shed.

This might seem a strange way to start but “The Goshawk” by T.H. White is a challenging read; too challenging for some I surmised on finding a copy in a waste bin at an Edinburgh College where I was teaching. Given my ornithological bent I had salvaged it. White’s account of his ‘training’ of a goshawk reads at times as a war of attrition between man and bird and was hard going as a result. Yet within it I discovered what was for me a nugget of inspiration, a reflective passage on being creative; a paen on the need to make. He writes of a specific aspiration and expectation; a “high and positive joy to make something true, some table.” He then goes on to convey the anticipated pleasure; “the music and truth of good workmanship, something enduringly true.” (1)
From this unlikely source my woodworking, “keen interest”, was given a boost and table construction was set upon in earnest. That interest hadn’t completely lain fallow, however. There had been a mini revival some years earlier when I resurrected the elm board mentioned earlier. Dad and I had unearthed it when we moved him and Mum up north in 1992. Around this time we had purchased a Tyme Cub woodworking lathe. My aim was to integrate spindle turning into a table with the elm board as its top. First though, we needed more elm for the legs and the turned features so we went to the Floors Castle wood mill in the Bowmont Forest. There behind the piles of softwood was a stack of hardwoods, including elm: hidden treasure. We bought some massive bits with the current and future projects in mind. It all came together. Elm from north and south was combined. The tightly grained top and warm brown coloured legs became a reminder of magnificent trees long gone. Unbeknown at the time, it became too a final “enduringly true” echo of Dad himself who died a few months later.

Over time Dutch elm disease migrated north to our village and I became aware of an old gnarled burr-adorned trunk protruding from a hedgerow. Walking past it one day, I heard a chainsaw hard at work and Jimmy felling the dead tree. A quick word with him saw the burrs sliced off and later delivered to my door; a new treasure trove for another day. And that day , whenever it might be, had been vaguely anticipated following a visit to an exhibition in the Royal Botanical Gardens in Edinburgh in 1993. There I saw some massive tables made from sections of elm burrs joined by a craftsman named Tim Stead. Some surface indentations and section joints were embellished with neat inlays and sparkling copper studs. It was truly inspiring. Over the years I followed up my interest and admiration by visiting his annual exhibition at his workshop at Blainslie near Lauder. During this time, Tim Stead’s reputation had rightly grown enormously along with his open hearted inclination to share his woodworking knowledge. Sadly, Tim Stead died in 2000 at the early age of forty eight. (see www.theguardian.com/news/2000/apr/29/guardianobituaries2). His woodworking legacy is immense and ongoing for which he was awarded the MBE. I mention just two aspects of this; his founding of the Woodschool near Ancrum and the Millennium clock in the Royal Museum of Scotland in Edinburgh. His trademark work with elm burrs adorns the latter.
Hence when the opportunity arose, I recalled how inspired I had been back in 1993 and resolved to try and do something about it. After all I did have have about ten elm burrs stacked in my shed! The time for action finally came a couple of years ago when I was explaining my ambition to Kevin, a local joiner and friend. I had sliced six burrs into two inch sections with a handsaw; not easy but a good workout! Kevin offered to finish them all to the same depth on his huge workshop planer/thicknesser. Together we selected the complementary pieces and joined them together with biscuit joints. Back home, much fine hand sanding, sealing and polishing saw two fine table tops emerge, intricately patterned and with the natural bark edge retained. The question was “what about the legs”? Step forward from the depths of the shed those massive pieces of of elm brought home from the Bowmont Forest saw mill all those years before with my father. More hand sawing down the grain, free hand sculpting with an arbortech wood carver saw the project come to fruition; a thirty year gestation process.

return of the mortice and tenon

Well one thing has led to another.On seeing the two elm burr tables, our daughter, Beth said “can you make me and Nic a table for our sitting room” before adding “not like these though. We want something smaller in size, more ‘vintage’ than rustic.” Attempting to take this request in my stride, I said “ok let’s see what we can find in the shed.”
Earlier this year I had been birdwatching on our nearby Staerough hill and while seeking out the kestrels I knew to be thereabouts I noticed that old fences and gates had been replaced. Nearby, I saw the old original ones chucked away into the bracken. The lichened patina on the wood, soft green and silvery, along with the rusty, clunky metal fittings twinkled from the undergrowth. “Too good to leave to rot” I had thought, so next day I returned with hacksaw, bushman saw, jemmy and masonry chisel. Anyone noticing me might have assumed that I was ‘tooled’ up for a felony rather than just a bit of salvage work. Anyway the light had just about gone as I trundled home, ladened with an old rucksack packed with aged timber.
On seeing all this in the shed, Beth proclaimed that it was “perfect” and so my fourth table and first of my ‘indian summer’ endeavours was commenced. What had struck me up there alone on the hill was not a feeling of foolishness as I laboured to deconstruct the gate (2). No, it was the soundness of the wood and the quality of the gate’s construction. Crosspieces had been fixed to the gate frame with perfect mortice and tenon joints. Now in pieces the newly cut end grain of the tenons contrasted with the patina of the post faces. I retained all this in my reconstruction and followed the original craftsman’s practice using the same joint throughout. The old rusty iron fittings were relocated as decoration. “20 out of 20”, proclaimed Beth at the table’s unveiling.
The “good work” of the1962 dibber had been improved on, a “high standard” maintained. Spriggy would have been pleased to know that his tuition and encouragement had spanned fifty two years to good effect.

References
1. The Goshawk. White. T. H. 1964. Longman, Green and Co Ltd
cover etching by John Dyke
page 122. Original work written from 1937 to 1939.
2. Fool on the Hill. Composed by Lennon and McArtney A track from their E.P Magical Mystery Tour 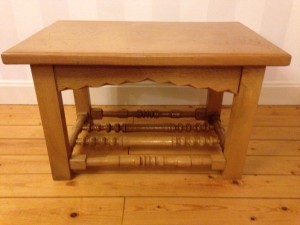 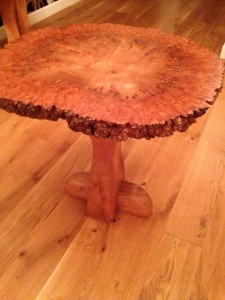 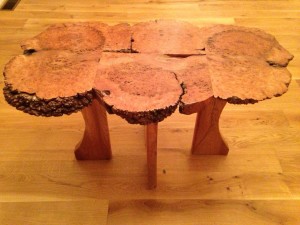 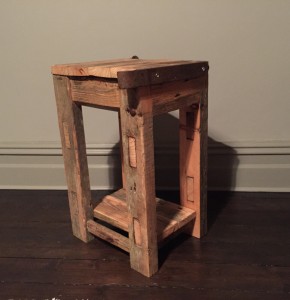