“Time is flowing like a river, on and on to the sea”. This was the haunting lyric in a song from 1980 by the ‘prog rock’ band, The Alan Parson’s Project. It came into my head for lots of reasons over the past few weeks, not least of all because for me as A. E Houseman observed in his poem:
“ Now of my three score years and ten twenty (and more! ) will not come again”. Still the upside of that is that from the pinnacle of seventy one years, I have lots of good memories to look back on and for me during the past month rivers have featured in my recollections.
Early years were spent in Oxfordshire beside a tributary of the Thames, the Evenlode. Summer holidays were spent on its banks where families would gather for picnics and swimming.
Middle years took me to the rivers of Cambridgeshire, the Nene, Ouse and all the still straight flood control drainage ‘levels.’ There my job as a social worker involved me in devising activities for what were termed ‘disadvantaged’ teenage boys. The fenland waterworld often provided the locations for such endeavours with voyages on barges, canoeing and engaging in night time fishing competitions just some of the memorable occasions.
Moving on to our life in the Scottish borders and the river Bowmont has been, literally, on our doorstep. It crosses the border into England, where it is known as the Glen, flows on to join the Till which in turn then flows “on and on” to the mighty Tweed and hence ultimately the sea. It has been the backdrop for hours of fun over forty years. Just this past month of warm weather saw our family turn the clock back with a ‘wild swim’ and picnic on the bank.
Time, multi layered, forever passing, can sometimes as I’ve described be slowed down in the mind so as to relive past moments and connect the intervening years. On other occasions time can be moved on in ones thoughts in anticipation of new horizons. Certainly stimulating the latter is my intention when via English PEN I write to a Turkish poet and political prisoner Nedim Turfent. I hope that the receipt of each letter helps him mark a step towards release. At the very least I hope that for a moment it encourages him to find some relief by stepping out of his here and now time and take his mind into a into a different place. Certainly in our recent exchanges we have explored a classic poem, set in Turkey entitled ‘the Conference of Birds’. It proved to be a fruitful moment with a memorable knock on effect. Our granddaughter had just sent us a poem she had written as part of creative writing project at school. It was inspired by a picture of crows and entitled ‘Night Angel’. The bird themes from both these communications naturally got me thinking and so I suggested to her that we embark on a collaborative writing project. It proved to be great fun as between us a story unfolded bit by bit. It is enclosed below.

Finally, just a note to say that in keeping with the ‘time’ theme I can report that a sequel to my earlier effort at historical fiction is now available from Amazon as an e book and hard copy. ‘Points of No Return’ continues from ‘Beyond Blind Faith and takes up the story of Seymour Waite, Elizabethan priest catcher. Suffice to say that he enters uncharted territory in every sense of the word. Twenty readers have followed his story to date, and has lead to the sponsorship of two more KIVA members. (see web site tool bar for more details). 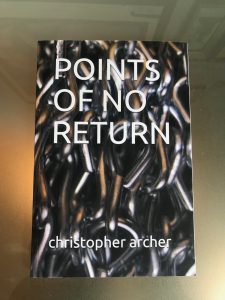