Many repetitions and chanting of my rehab mantra see me well placed five weeks after my hip-op. The downtime between each of the daily four sessions has been devoted to reading with the Dave Hepworth review of the music of 1971 the main event. ( see previous article)

I was pleased to read his opening account of the year’s albums as it commenced with Carole King’s ‘Tapestry’. As readers will know she is a favourite artist and this a favourite album. Two hundred and seventy pages chronicling this mammoth year of music followed. It culminated in the expression of his own personal opinion. Hepworth didn’t hold back. “Maybe the best album of 1971”, he concluded was ‘Who’s Next’ by the Who. He doesn’t stop there, warming to his theme. “This is largely because of one tune, which may well be the best recording of the best year in the history of recording, the five minute opening cut, ‘Baba O’Riley’.
It felt good to have another personal favourite endorsed in such a fulsome manner. I immediately polished up my Who badge which I had purchased a few years later at an old Wembley stadium gig which me and my brother Nick attended. Lasers, Lofgren on guitar and trampoline, The Who and ‘Won’t get fooled again’! What a day. 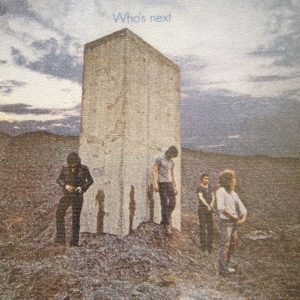 As you can see, between rehab and reading, reflection kicks in and I found myself back in time to other musical moments of the late 1970’s. I was working with the ‘troubled’ mainly ‘troublesome’ lads of the town of Wisbech. I endeavoured to channel their energies into a five a side football team, The Wisbech Tigers. After training sessions at the local Hudson Sports Centre I would call on my teacher friend Dave. Dave was the archetype record collector and archivist of that age. Albums were bought in bulk, their covers protected in cellophane sleeves. He was a generous bloke and shared his passion with me so courtesy of the faithful TDK chrome tapes we recorded a lot of stuff. My current rehab time has seen me digging deep into the cassette treasure chest to good effect. Now mindful that “one man’s meat is another man’s poison” I am still inclined to share a classic track and a favourite band from that era even if it is for “people of a certain age” (see site Home Page).
The band is Barclay James Harvest. My combination cassette covers studio and live performances of ‘Child of the Universe’, ‘Galadriel’ and ‘Hard Hearted Woman’. Terrific. The classic track though is down to Manfred Mann’s Earth Band from their album ‘Watch’. ‘California’ has wistful lyrics wrapped around a guitar solo of majestic proportions.

Anyway, back to Hepworth. His passion didn’t remain stuck in 1971. Forty years on I heard him chatting on the Radio Four programme, Front Row, where he nominated his favourite album of the year 2010. It was ‘Chateau Revenge’ by the Silver Seas. Suitably encouraged I bought it and could see again that we had similar tastes. Over the past few days I have been listening to it as I potter about with my walking sticks. Track seven is a gentle song which starts with a lyric about observing life “from my window sill…..” Between bouts of exercise and pottering this is something I’ve been doing a lot off. This looking and musing has conjured up just one more supergroup but on this occasion one with a difference. Its members lived in the 17th, 18th and 19th centuries in Japan. Their medium was hinted at the outset of this article. The trio are masters of a poetic form, the haiku. They are Basho, Buson, and Issa; ascetic, artist and humanist.
All three were born in rural villages. All three were poet wanderers “for whom travel and its difficulties were a form of freedom and a way of disciplining the mind” (1) and for whom the natural world inspired. Their experiences were recorded in the specific poetic form known as the hokku or haiku; a form which required that “language be kept plain” and rules strictly adhered to. Three lines and a precise number of syllables was the poetic limit which the haiku set. A common place format sees a line of seven syllable words sandwiched between two lines of five syllable words.

So with all this running through my mind the question arises, “what’s next?” Well ‘haiku’ since “from my window ………