Before I take to the road with renewed vigour, I need to heed Dylan’s words and turn a few of ‘my back pages’ to 1964. I was fourteen then and the proud owner of a good road bike. It was an Armstrong with a Reynolds 361 frame. My Dad had acquired it after seeing it lying  chain-less and abandoned in a neighbouring farmer’s barn. It had been bought for his son, a few years older than me: a fixed wheeled lightweight speed machine. In fact it proved to be too speedy, too hot to handle and ended up being pranged into stone wall.  Result? Dumped and eagerly offloaded. Dad got it repaired by the local cycle man in Long Handborough, who tamed it with gears . Armstrong was back on the road, its golden – globed handlebar badge shining once more. Armstrongs were one of Britain’s great cycle manufacturers, long gone now, but self evidently built to last! It served me well back in the 1960’s before being overshadowed by a Lambretta scooter. It was years later that the bike saw a rebirth up here in the Scottish borders. Upgraded with modern gears and resprayed light blue by Simon Porteous of Kelso, it took me on runs with my stepsons Joe and Sam and my daughter Beth. Her early years were spent sitting contentedly in a carrier and being taken up the Bowmont valley for picnics. Later on in 1991 a circumnavigation of the Isle of Arran saw Armstrong accompanied by Sam on his new Raleigh Dyno. This was and still is a super bike. I say is because when Sam emigrated to Indonesia ,Raleigh was left behind for me. Two bikes then both British classics; a back story complete? Not quite

They have been joined by a new bike on the block, all the way from Taiwan and courtesy of  ‘cycle to work’ . A government initiative to encourage healthy, green living,  this scheme encouraged the purchase of cycles through the work place at a subsidised rate. With retirement round the corner this was too good an opportunity to miss and so a red Specialized Secateur Elite road bike was mine.With more gears, cleat type pedals, and a frame set up giving a high riding position, Specialised brought a new riding experience. I could now go further, faster and with a better view all round. End of story now? Not quite. Up here mountain biking is full on with Glentress, Kielder and more offering lots of off road fun. My 65th birthday was the perfect moment to complete my cycle set: a present  of a Specialized Hardrock mountain bike. 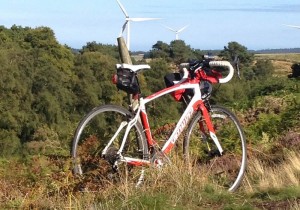 Four bikes spanning fifty years: Armstrong, Raleigh and Specialized:  a unique supergroup as evocative for cyclists as Emerson Lake and Palmer or Crosby Stills and Nash are for older music lovers.