With days slowly lengthening and stiff left hip easing at the prospect of spring, it was time to ‘get back on track’ with a first run of the year. So on February 23rd, on a recently serviced Armstrong , I followed the Bowmont upstream and into the hills. It was a chilly, grey day which made for invigorating biking. Apart from random road running pheasants there was little movement to be seen. I arrived at the road end at Cocklawfoot as snow began to fall. Through the flakes I spotted something new on the far side of the conifer plantation. Closer inspection revealed a new footbridge over the river. Surrounded by trees, it was a secluded spot, austere today as the brown churning water hurtled along below me. ‘A bridge over troubled water’, came to mind. “I must play that again”, I noted to myself, as I set off along the switch back downhill gradient home. 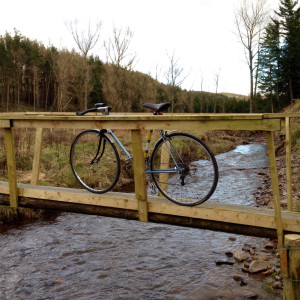 Now firmly back on track March 7th saw me heading out again, bike of choice that day, Specialized, as I intended a longer run. Heading downstream past where the Bowmont becomes the Glen my destination was the Maelmin cafe at Milfield. I turned off the road at Yeavering, dismounted and walked towards the river. This took me ‘across the tracks’ of a disused railway line. A song of the same name by Nils Lofgren quickened my step and took me up to the narrow footbridge over the Glen. “Must play that again,” I resolved as I stood on the bridge looking down onto the fast flowing river. 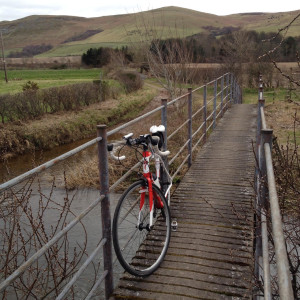 Road rejoined I sped on to the cafe for ‘border tart’ and tea. Replenished, I set off home, criss-crossing the Glen at Kilham and Langstone. It had been a twenty mile run. The snowdrops in the woods at Pawston a reminder that winter was still very much with us.

What a difference a week can make! March 14th was bright blue, warm and sunny, just right for a ‘Hardrock’ adventure “off the beaten track” in the Bowmont Forest. It is uphill from Eckford Mill to the forest which means lowest gear, slow, silent pedalling which is just right for taking in the surrounding sights and sounds. Celandines were peeping out from the hedgerow bottoms, all glossy, wild garlic , verdant green carpeted the banks of the adjacent burn which burbled away. In the forest all was quiet when I sat beneath a towering pine for lunch. A bee arrived and buzzed around my jam sandwich,. A buzzard called overhead. These were the only sounds in the warm stillness. 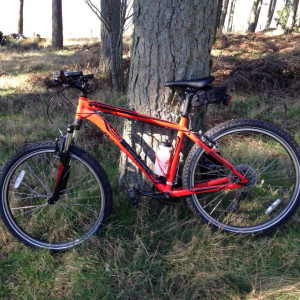 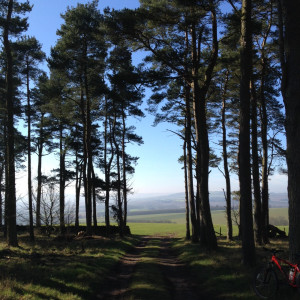 On then through the forest to Lurdenlaw via Mainhouse. Up on the tops I stopped to take in the border country vista. A skylark rose in song. It was the first day of spring. Remounting Hardrock, I set off downhill. This warranted mild breaking which in turn prompted a distinct rattling sound. I stopped. A brake block had loosened and was dangling but had not impeded the spokes. “Lucky,” I concluded, no “blood on the tracks” and then, well readers you’ve probably guessed my other consoling thought as I tightened everything up, “I must play that when I get home”.

For more on this see TRACKS under the ‘And a bit more’ page.