HIKING AND BIKING
with a little
HITCHHIKING
During breaks from painting our kitchen, Scott the decorator and I chatted about our mutual interest of cycling. He is an avid mountain biker with a strong Strava App digital record to show for it; all along the top of Helvellyn being just one example. When recounting such routes he mentioned how their ruggedness often required hiking as well as biking. It sounded like a good experience and a combination I might implement on my more mellow local rides.
Hence on September 6th I thought I would have a go. At 3.30 I set off for Clifton on Bowmont and from there up the Curr valley. Opposite the cottage below the wood I ventured off road and followed a track towards the foot of the ridge leading up to Wood Hill and Percy Law. I parked the bike beside the conifer plantation, bike ride over, and started the hike up to the summit. From the top I took in the views all around. Yetholm Loch shone in the distance, Latchly Hill and Hownam Law both clearly visible. The distant hilltops prompted a mental “reeling in of the years”. (Followers of the website will recall this phrase as one borrowed from a song by Steely Dan.) Anyway, camping expeditions with my stepsons, Joe and Sam, beneath the two hills came back to me. Below me sat Woodside farm and opposite the spinny which overhangs the river Bowmont. More happy days returned. The spinny had been a favourite cycling destination twenty eight years ago. Back then Armstrong was fitted with a child carrier behind the saddle into which our daughter Beth would be strapped. From there she would enjoy the ride up the valley, that is if she wasn’t sleeping. Once at Woodside we scrambled in and about the wood and cooked sausages on a camp fire beside the river.
It seemed uncanny that having hiked and biked and reminisced in tune with a Steely Dan lyric that a few days later one of the composers of the song, Walter Becker died. Obituaries and letters in the Guardian reported his partnership with Donald Fagan with fulsome praise with much debate about their most accomplished album. I guess the verdict on that depends on personal taste. As for me one of my favourite tracks doesn’t even make it onto their Greatest Hits album. But more of that later. Suffice to say that in regarding their work as a whole Lindsay, from Bristol, summed it up in these words “beautiful,acute and beguilingly genre – defying.” (1)
A few days later I was out and about on the minor roads of north Northumberland. It was proving to be a memorable ride. Passing the lake at East Learmouth three green sandpipers flew up in full lilting song, white rumps clearly visible. A rare experience. On I went for an hour down to Wark, back via Sunilaws before returning to the lake from the opposite direction. The ‘Dan’ legacy must have still been on my mind because I was humming a favourite track song “Don’t take me alive”.(2) The musical reverie was interrupted, however, when another familiar sound filtered through. Sadly it wasn’t the sandpiper trill again but the rumble of a deflated back wheel tyre. A sudden flatty! No problem, of course. I took out my spare tube and fitted it. Restoring the wheel to its forks with chain fully reconnected, however, proved more difficult. So slow was my progress that time was getting on. No problem. A quick phone home would stop unnecessary anxiety. Flat battery! No charge! Panic now set in. It was 6.00 pm and at least a mile from the nearest habitation. I peered down the road past the lake in mild desperation. Uncannily the ‘Dan’ lyric of my favourite song with its pounding intro returned:
“Agents of the law,
Luckless pedestrians
I know you are out there…”
It must have had the power of prayer for round the bend came not a pedestrian but my first vehicle of the day and no ordinary one at that. “Agents of the law” appeared in a large land rover. It pulled up alongside, the window wound down slowly. “ Can we be of any assistance?” My sigh of relief gave the answer and quick as a flash two police constables were out and wiggled wheel and chain into position. “Anything else?” “Well could I possibly use your phone . My wife will be wondering where I am?” “How far have you got to go?” “Five miles.” “Well that will take another half an hour, she will be well worried by then. We can take you home.” With that they opened up the back of the land rover to reveal a secure caged chamber into which me and the bike were quickly secured. “You’re lucky”, they said, laughing, people in there are usually cuffed.” My biking had culminated in an impromptu bit of hitchhiking courtesy of two agents of the law. No luckless pedestrian me, rather a lucky cyclist! 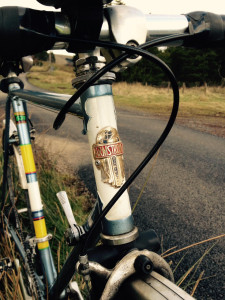 Hiking and biking and certainly hitch hiking were destined to be put on hold for two weeks when we set off for a holiday on the Greek island of Paxos. The Ionian sea, greek salad and moussaka beckoned with snorkel, flippers and masks the only activity kit packed. It was only when we were flicking through the travel agent’s in house dossier that we learned that Paxos was a hiker’s mecca. Moreover a detailed guide of walks was available, compiled by a British couple over a period of twenty years of visiting the island. Intrigued we acquired a copy of our ‘Bleasdale’ (3)from our travel agent rep and set out to explore. One reviewer of the guide concluded that “Bleasdale is to Paxos what Wainwright is to the Cumbrian Fells.” Praise indeed and so it proved. His mapped trails took us through the dappled shade of olive groves, up and down the limestone paths and between the abundant drystone walls before leading us down to secluded white pebbled beaches and the turquoise sea. ‘Footpaths 1,2,3 and 4’ was our first memorable hike. Setting out from Lakka we headed out along the east coast. The paths meandered for about three miles before culminating in a steep descent through juniper trees and ending directly above a quiet beach and… bar. Ben’s bar where stuffed peppers and tomatoes and mojitos combined to make welcome pick me ups.
A day or two later we hired a car for the day and braved the narrow twisting roads. It was for a good reason. We wanted to explore the rugged west coast. The route proved to be a challenge with few passing places and steep drops on either side. We made it to the end of the road unscathed where a roadside wreck reminded us that others had not been so lucky. 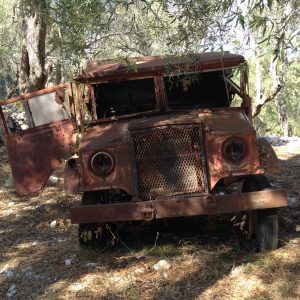 End of the road

Still now back on foot we sought out Bleasdale’s footpath 34. A ‘holloway’, a track enveloped by a leafy canopy, took us on a steep downhill. It suddenly opened up to reveal the shimmering waters of Erimitis bay and its towering white cliffs. 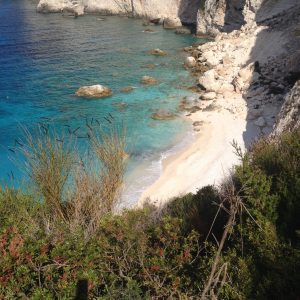 Paxos: no biking, no unexpected breakdown and hitch hiking, but truly memorable hiking and lots of swimming and snorkelling too. I feel a haiku coming on.