It was to be a big day in my ‘Hardrock’, off road, cycle ride calendar: the circumnavigation of Kielder Water just over the border in Northumberland. In prospect was a ride of twenty seven miles around the largest man made lake in Northern Europe. The fifty mile drive to get there is splendid in its own right with hairpins and huge vistas all the way through Liddesdale to the border. The omens weren’t good, however, for as I passed by the former railway station at Saughtree, drizzle set in. Thankfully, by the time I arrived at Kielder village, the weather had changed and I was able to set off along the northern shore path at 11.15 in sunshine.
Opened in 1982, Kielder Water was formed by the flooding of the upper part of the North Tyne valley. Its function was to provide water for the industrial north east. Whether this massive act of engineering and land transformation was fully warranted is debatable. What can be said, though, is that the outcome is an awesome sight and a memorable cycling experience. Hugging the shore, the lakeland trail ducks and dives the cyclist along with ever-changing vistas at ones side. The scale of the views are unexpectedly vast and on this day were especially colourful. New leaf burst, glittering water and fluffed up clouds became the order of the day as the miles were clocked up. En route there were plenty of invitations to stop and stare. On the north shore I enjoyed my first pit stop at the Janus Chairs ; monumental waterside recliners for the weary and meditative. 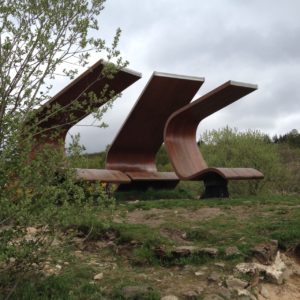 A few miles on and another opportunity to stop and explore occurred; signage and information pertaining to the long gone Plashetts Colliery. Its coal and coke were once transported to Tyneside, the Liddesdale lime kilns and woollen mills of Hawick all by way of the Borders Railway. Now both long gone, the colliery itself now lies at the bottom of the reservoir.
Halfway round the lake one gets to the southern shore by way of the dam-top road. To my left the grass verge was carpeted with dandelion seed heads. Now, I like dandelions at the best of times but today they were party to a particularly special sight. Feeding on them was a flock of twenty siskins. As I cycled along, they repeatedly took to the wing and accompanied me to the other side, their olive and gold markings lit by the sun. Such a large flock was a first for me. It prompted the recall of some wise lines by e e cummings:
‘may the heart always be open to little birds who are the secret of living”
It had been a bit of an unlikely place but the dam top verge of spent dandelions had offered up that secret.
After another picnic I was off again. 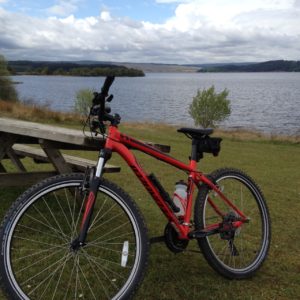 Hardrock and view from Kielder dam

The track was smooth so imagine my surprise on hearing the ominous whoosh of air being expelled from the front tyre. I hadn’t seen another cyclist all day so I was even more surprised when two turned up just as the tyre went flat. “Got a spare?” inquired a Geordie accent. I had. “We’ll soon fix it” and they did. Bucked up by this ‘kindness of strangers’ I sped along for another seven miles until another lakeside construction caught my eye and prompted a closer look. It was Freya’s hut. 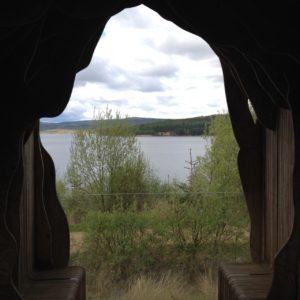 Looking out from Freya’s hut

From inside, the view across the water looks straight at Robin’s hut on the north shore. The delightful story of these two lakeside dwellers on their respective sunny and sunless sides of the lake and how this affects them is told inside. Indeed true to the story, the late afternoon sun warmed me all the way back to Kielder village, where I arrived at 5.15. Great day.

Coasts and Castles : Spittal to Holy Island. May 25th.

A grey sea fog, the east coast ‘haar’, greeted me at Spittal as I unloaded Hardrock and refitted the front wheel. Luckily, the drizzle, cool breeze and fog were drifting in from behind as I set off along the coastal track to Holy Island.To my left the north sea surged , a ferment of wind tossed spumes, white flecks and creamy foam.Things quietened down, though, once I was on the leeward side of the vast expanse of sand dunes which are a feature of this unique area of Lindisfarne. Indeed just past Goswick things were calm enough for me to spot a stonechat amidst the marram grass while larks rose up above in song. Further on the sands and mud flats beside the Holy island causeway stretched far away into the mist. I turned round and headed back into the wind. 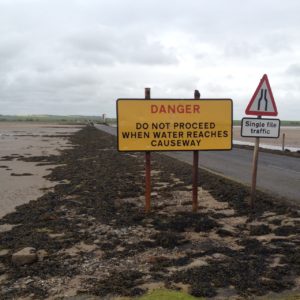 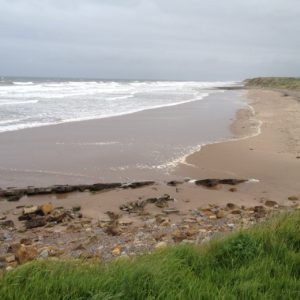 The return ride of thirteen miles was going to be a challenge and it was so I decided to take a pit stop at the bird observation hide at Beal sluice. The last time I was here an egret had padded about, its plumage a pure white beacon amidst the dun colours of the mudflats and marsh and a first sighting of this bird so far north. Today, there was no such break in the monotones. Still it was warm in the hut and an opportunity just to take a leisurely look outside. Slowly, the salt marsh and mud flat dwellers emerged. A barnacle goose grazed unperturbed, a wigeon’s golden head stripe peeked above a tussock, and five ringed plover scurried about on the mud. Further on three slightly larger wader types stood on the mud motionless. I wasn’t sure at first until slowly it dawned on me: Beal sluice had brought me another ‘first’ appearance: golden plovers. It was the handsome dark chest of the male that convinced me. It had been a memorable day.

No bike was required for this excursion. The visit to Harewood house had been arranged by our daughter, Beth, with birds in mind; red kite to be precise. Before we expand on that, though, what is the story about this grandiose establishment? Well one might say that the current mansion has emerged from a troubled past. It was built on the site of Gowersby Hall, the ruins of which can still be seen today. This was the home of Thomas Wentworth, Earl of Stafford, the right hand man of Charles 1st. Well, that is until Charles executed him in an effort to placate the parliamentarians who were critical of his rule back in the seventeenth century. As history tells us, this tactic failed and Charles went on to suffer the same fate. After all this, the fortunes of the Wentworths went downhill fast and the hall fell into ruin. Step forward then the Lascelle family. Of Norman ancestry and newly enriched by their ownership of sugar plantations in the West Indies and all that went with it, the Lascelles purchased the estate. Harewood house was built, more palace than house, complete with lake and grounds designed by Capability Brown. Indeed from my boyhood knowledge and family history, Harewood is a strong echo of Blenheim Palace in Oxfordshire, with Brown’s lakes setting off the architecture. 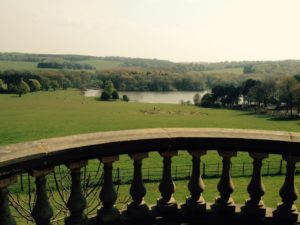 As our day there was blessed with warm sunny weather it was easy for the brutal origins of the place to fade. This was especially true for bird lovers because the current Lascelle family have transformed the estate into an ornithological and horticultural wonder. In offering a home to the red kite, this once embattled bird has been granted a haven in which to thrive. And thrive it has. No sooner had we arrived and set out on a walk towards the lake when five red kite appeared swooping, sailing, and soaring above us. Transfixed we followed them from below. On and on we went drawn by the spectacle to the far end of the lake. From out of nowhere a jeep appeared and stopped beside us. The window slid down revealing a stern faced young man. “I am the personal assistant, the P.A., of Lady Harewood. She has observed you from the house and instructed me to investigate”. Curbing our inclination to splutter with laughter at this crypto feudalism we carried on listening. “Are you aware that you are out of bounds here. Have you got tickets?” We nodded. I attempted a lightening of the moment with “ do we look like miscreants?” only to be met with “show me!” On seeing the documentation a mild mellowing followed allowing me to pin our delinquency on to the red kites. “Fantastic sight, we just had to follow them and here we are. Please convey our congratulations to her ladyship for pioneering such a fine conservation initiative.” With that we were waved on our way and dutifully re traced our steps.
Laughing all the way, those footsteps inadvertently led us on to a second ornithological wonder. ‘Her ladyship’! has established an aviary of exotic birds near to the big house. Not everybody’s cup of tea perhaps but this enterprise was immaculate and moreover home to a great surprise. Our youngest son and family live in Jakarta , Indonesia.We have met up in Bali where on one occasion we went on a guided birdwatching walk. Now Bali is home to some beautiful birds and two in particular; the Java kingfisher and Bali starling. The former was spotted several times in the rice paddy fields around Ubud and splendid sight it was too.The Bali starling though was a ‘no show’, not surprising this as we learnt that it is in serious decline . Not here in Yorkshire. Harewood house aviary is home to this rarity. While our native starling is an attractive bird for sure with its shimmering iridescence and bubbly chatter, the Bali starling is equally stunning for being quite the opposite. Pure white all over with an ice blue eye stripe and wispy crest, seeing the Bali starling was a special moment, even more so when it burst into its rich lilting song. 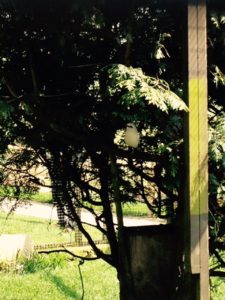 Back in Harrogate while chatting and chuckling about our day and its encounters our eyes were drawn upward from the garden by a sharp shrieking sound. Five Swifts swooped and whooped their arrival. Quite a day!