Three hot days in mid August called out for John Lennon’s lyric to be put into bicycling practice. Fittingly inspired, I set out on ‘Hardrock’ for an exploration of the old railways around Cornhill. With a warm wind behind me another old song emerged to provide me with the perfect musical accompaniment to my pedalling;
“Summer breeze makes me feel fine
Blowing through the jasmine of my mind”
The Isley Brothers vocals and electrifying guitar (2) took me all the way to the old station at Sunilaws where I joined the disused Kelso to Cornhill track. In its heyday trains would stop at Sunilaws to be loaded up with sugar beet en route to the factory at Berwick. Today only the track bed and trackside habitat remain. But what a legacy? Elder, cherry, crab and hawthorn, all burgeoning with ripening fruit, crowded the embankments and cuttings as Hardrock took me along.Emerging from all this verdant growth, the track arrives at the massive viaducts at West And East Learmouth. The architecture and views over to the river Tweed make them special places. Today for the botanist they were especially ‘special’. It wasn’t exactly jasmine that scented the air there but an equally sensuous host of wild flowers. Colonising the track bed in this out of the way place were yellow trefoils, blue bellflowers, gold St John’s wort, pink mallow , yellow toadflax, mauve scabious and most surprising of all a dark blue? Well, I wasn’t sure what this flower was until dormant knowledge stirred, memory kicked in and then there I was back in time to 1963 and in a place very similar to where I was today. It was the massive cutting on the Oxford to Worcester line near my boyhood home of Combe. Back then we spent our days roaming the Evenlode valley, fishing, swimming, floating down on giant lorry inner tubes always with the backdrop of steam trains charging up and down. Isambard Kingdom Brunel had been the architect behind the line and he had left Combe with the highest bridge and straightest mile on this section of his Great Western Railway. It was beneath that bridge on the steep sided cutting on a days ‘roaming’ that I discovered the rare dark blue flower, the Meadow Clary. Now, today, in another place and time, I was re-acquainted with, well not exactly it, but its slightly more common relative, the Clary or Wild Sage. It was a pleasing moment and yet another reminder of the value of these marginal, almost forgotten places as refuges for the natural world.
Off again, I cycled all the way to Cornhill near where I joined the old Wooler line. Overhanging trees narrowed the track and formed green tunnels or ‘hollow ways’ of dappled light. I stopped at an opening and looked out from the track way onto miles of ripening wheat fields.
“Sitting on a big rock,
By an old bridge
Before a hawthorn holloway
A pair of linnets kept me company
On this warm and breezy day.” 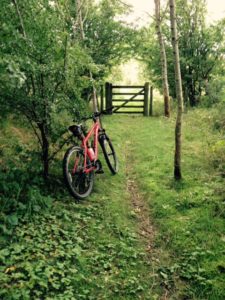 An even hotter day followed for ‘Raleigh’s’ outing, chosen so I could periodically dismount and explore on shoes without cleets. I headed off to Branxton and the site of the battle of Flodden. On many occasions I had sped past. Today, though, I intended to stop and explore. As I was locking up the bike, I was joined by another cyclist. We chatted. I was pleased to hear him extolling the delights of cycling in my neighbourhood. He was, however a man in a hurry for after a brief look at the Flodden memorial he was on his way. “Where are you heading?”, I asked. “Home to Beadnell,” he replied, adding “Should have clocked up a ton by the end of the day”! “Wow” I thought.

Up at the memorial I read the sombre account of the battle five hundred years previously. It had been a day of carnage spanning four different phases. A flanking manoeuvre by the Earl of Surrey ultimately proved decisive in favour of the English. It all seemed somewhat incongruous here on this day beneath a clear blue sky, amidst rolling hills, and golden cornfields. ‘Raleigh’ took me on my way. What a fine old cycle it is: light, and perfectly balanced.The white bells of bindweed clambered over high hedges as I made my way to Tillmouth. My aim was to explore another spot which had always been sped past, usually by car; the impressive Twizel bridge adjacent to the Coldstream-Berwick road. A nearby plaque put me in the picture. The handsome structure had been completed in 1511 and was a remarkable feat for that time. So much so that its single arch span of ninety feet remained the longest such structure in Britain until 1727. I read on and it transpired that the Flodden story had followed me here. Three years after the bridge had been built it allowed Thomas Howard, the Lord Admiral, and his father the Earl of Surrey, to cross the river Till with ten thousand men and cannon to march on to Flodden and engage with the Scottish king, James IV, and his army. 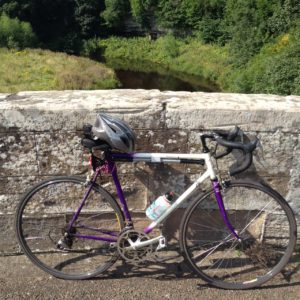 I looked down from this high wide vantage point onto the peaceful Till below before setting off for my destination, the Old Dairy Cafe and antique rooms at Ford. With its home baking and assorted curios, the Old Dairy is a favourite ‘pit stop’. Once its fruit cake had lived up to expectations I was left with time to browse. Amongst a random pile of old books I came across one entitled “English Rivers”. Given that I was just about in England and beside the Till I looked it up in the index; no reference appeared despite it showing up on a map. Still the seed had been sown and my mind was drawn back to yesterday’s ride and the river memories it had conjured up; the Evenlode. A pleasant surprise awaited. Not only was there an evocative account but also a quote from a poem. (4) As I read the words below:
“ The tender Evenlode that makes
Her meadows hush to hear the sound
Of waters mingling in the brakes
And binds my heart to English ground.

A lovely river, all alone
She lingers in the hills and holds
A hundred little towns of stone
Forgotten in the western wolds.”

I recalled the deep pool below that high bridge and home to Meadow Clary. Floating leisurely there were huge Chub. How wary they always were of the bread paste bait we trotted down to them. This unexpected echo from the previous day and of all those yesteryears made for a fine end to a perfect day of cycling.

Unbroken weather beckoned the following day, inviting me to complete a hat trick of rides. The route was to be the long run to Upper Hindhope and back down the Kale valley. “Specialized’ it had to be in order to control the long fast down hill cruise to Hownam, more of which later. The outward route purposely took me to Cessford near Morebattle where I intended to explore the ruin of Cessford castle. As with Flodden field and the Twizel bridge, I had passed it many times but never explored. Having just read Richard Hines account (3) of his training of Kestrels and his role in the creation of his brother’s tale of Kes and the subsequent film, I wanted to see if this towering ruin might be a similar home to the bird. Not so it seemed as I peered up from inside the ruin to a cloud filled blue sky. There were, however, other connections to be made. A nearby information sign informed me that ten years after Flodden this bastion of Ker clan power was besieged by the Earl of Surrey; Henry VIII’s Lord Lieutenant of the Northern Marches. His mission to pacify the north and scupper the ‘Auld alliance’ between Scotland and France had obviously continued unabated.
On then to Oxnam, past the Kirk and hillsides stippled with hawkbit and harebell, and over to Pennymuir. A wayside sign alerted me to even more ancient history. There on the moor straddling the old Roman road of Dere Street the outline of a Roman encampment can still be seen. Home to five thousand legionnaires it sustained their invasion of the north. Today it was the site of a family picnic down by the Kale at Towford. Upper Hindhope and the head of the river was just a couple of miles away. From there, with the “summer breeze” behind and within me, I began the thrilling descent: perfect surface, gentle undulations, curves to lean into and no traffic except for sheep. It was the perfect ride. 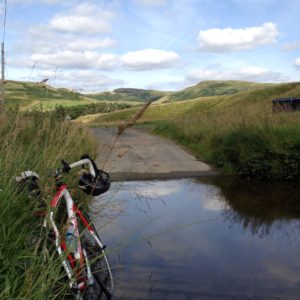 This purple patch of weather, that “summer breeze”, had seen me cover ninety one miles. Dare I borrow, just one more time, from that great year of music, 1973? The wheels going round and round had stimulated “mind games, pushing barriers, planting seeds” (5) and by pedalling I had been minded to relive halcyon days by a Cotswold river, recall history and enjoy the natural world of the here and now.

P.S. August 24th. A night of torrential rain was followed by unexpectedly glorious day. It was an opportunity for my fourth bicycling ‘bon vivant’, good old ‘Armstrong’, to take to the road. A round trip of sixteen miles to the head of the Bowmont valley and beyond saw us on the bridge over Cocklawfoot burn. Last time we were here ‘off the ‘beaten track’ it was snowing. Today it marked the culmination of four days riding with my own ’ton’ of miles eventually recorded. 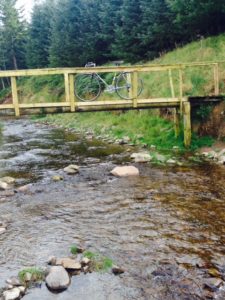 Armstrong at Cocklawfoot Burn: off the beaten track

2 thoughts on “WATCHING THE WHEELS”