Well it certainly felt that way on two recent runs on Specialized and Raleigh. The Dylan lyric and Julie Driscoll vocals pounded through my head as I held on tight during two fast downhill stretches. Let’s take them one at a time. On April 9th I set out on Specialized and headed up the Kale valley. A new phone app, Strava, installed on my phone by Neil, electrician and fellow cycling enthusiast recorded the details. He had said “you’ve got to have it ,it will take you to a new level! It did indeed record all the details, especially the fact that I had gained an elevation of 405. Not sure what this meant but the downhill afterwards following the climb up Whitton hill and crossing the old Roman road of Dere Street indicated that it was significant. It certainly felt that way as the “rolling down the road” lyric and echo from Julie Driscoll’s 1968 hit accompanied me a 30mph downward surge.
Twenty two miles were covered that day, a day on which spring appeared to be distinctly backward much like the day Thomas Hardy once observed:
“The trees are afraid to put forth buds
And there is timidity in the grass” (1.)
As if to confirm the fact, bird life too was scarce. One of the few signs occurred as I crossed Dere Street just before I began my descent ; a curlew briefly called from somewhere on the moor. There had been a couple of other bird sightings earlier near Crookedshaws farm. The flooded hollow there was home to not only several lapwings but also a pair of shelducks. Their pure white and russet brown plumage stood out against the sombre backdrop of still, dark water. This pool is becoming an ever present, welcome, feature now as rainfall and water table levels seem to have risen. For more on its significance see my account of last year,now appearing under “and a bit more”.
Later in the month, on April 19th, Strava was in action again, recording a run out on Raleigh. Twenty eight and two thirds of a mile were covered over three hours at an average speed of 13.2 km per hour. Destination? Dunsdale Crags looking out at Bizzle Crags at the edge of the Cheviot hills. From afar, for many months of the year, a patch of white emblazons the Cheviots. According to Robert MacFarlane mountaineers would call it a ‘firn’ or Scots from the north east a ‘rone’ (2); both evocative names for this beacon of hard, old,consolidated, crystalised snow. Today was the day I intended to cycle to it. Fourteen miles of slightly uphill pedalling saw me there. Raleigh was parked beside a boulder while I clambered up the scree strewn side of Dunsdale Crags. 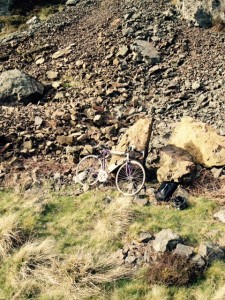 Suitably ensconced, I spent the next forty minutes scanning the skyline and ‘firn’ of Bizzle Crags before me. Everything was crystal clear under a blue sky, the bright sun picking out the pink tints of the crags and glistening the burbling burn below. The last time I was here, I watched a kestrel out and about over the hills (see Gallery). Today it was a swallow. Flying slowly into the fresh breeze, it was my first sighting of the year. Beneath it a wheatear bobbed about on the scree, its white rump as bright as the ‘rone’ above and beyond it. Trees might still be “afraid to put forth buds” yet the summer migrants of the bird world were here ready to embrace spring.
The homeward run was exhilarating, as intimated at the outset, with Raleigh’s wheels well and truly on fire. Light weight and responsively manoeuvrable, it skipped around the potholes and swept over the undulations, “rolling down the seven mile stretch of the College valley road. “You’ve chosen a good day for it”, a dog walking woman called out near Cuddystone hall as I zipped by. And it was true.

One thought on “WHEELS ON FIRE”