Cecil Emden was born on December 31st 1889 and died in February 1980. He had been an Emeritus Fellow of Oriel College, Oxford, and its former treasurer. An earlier collegian had been Gilbert White, the famed eighteenth century naturalist and author of the classic work, ‘Selborne’. This common heritage and Mr. Emden’s own deep interest in ornithology and literature saw him explore the Oriel archives on White which in turn led to his biography of the man, entitled ‘Gilbert White in his village’. The fact that Selborne was not too far from Mr. Emden’s own village of Combe afforded him the opportunity for close exploration of White’s world. Published in 1956 by the Oxford University Press, the work prompted this comment from the Spectator magazine:

“this elegantly written book is to be commended heartily.”

Anyone seeking insight into White and his seminal work will not be disappointed by Mr Emden’s observations, which he modestly described as “a character sketch.” He homes in on what he regards as the essence of the man both as a naturalist and person. He recounts White’s observational and meticulous recording skills regarding the lives of birds, his genial and appreciative regard for his neighbours and finally his reflective, artistic, response to what he was seeing around him back then in the eighteenth century England.
When White wrote “the male honey buzzard soars above the Hanger (i.e. a hillside beech wood) and on sunny mornings soars above the hill to inhale the coolness of the upper air” , Mr. Emden is moved to conclude that “we can feel that he (White) gained an intense artistic pleasure in these birds……It is worth emphasising that his research was not strictly confined to the increase of knowledge for he would never have been so remarkable a scientist if he had not been an artist too.” White’s observations of a spotted flycatcher are noted as a testament to this sensitivity. He reports in detail how in one hot summer “affection, prompted the parent to hover over the nest all the hottest hours while with wings expanded and mouths gaping for breath they screened off the heat from the suffering offspring.” Given that a later chapter is titled “the friendly neighbour,” White would have shared all this with his fellow villagers and in return gained their stories too.
What struck me all the more, as I read the ‘character sketch,’ was that I was not so much learning about Gilbert White but hearing about Mr. Emden or Cec (hard ‘c’ ) as we affectionately called him, himself. When he wrote the note to me cited earlier inviting me to wonder about the behaviour of our local redshanks , he was enacting his own interpretation of White himself : “that friendly author anxious to communicate to his readers his own eager interest in natural history.”
He was seventy four when he was reading my boyhood diaries, giving me binoculars and a two volume edition of ‘the Birds of the British Isles and their eggs’ by T A Coward. On the inner page of volume one with its gold leaf embossed cover of a jay he had written ; “hoping that you will become a keen birdwatcher and will get a lot of pleasure from this first rate hobby.” A friendly neighbour indeed, and moreover a friend to his adopted village.
One of his more public displays of this was his successful campaign to prevent the erection of electricity pylons across the Evenlode valley and up and over Gritney hill. At a more everyday level his support for the village cricket teams prompted a typical gesture, the encouragement of the future generation of players. He bought all the boys of the village a copy of ‘Trevor Bailey’s book of cricket’, complete with advice and illustrations on such skills as ‘the forward defensive stroke’ and how to grip the ball and bowl an ‘out swinger’.
And what of the third theme of ‘Cec’s’ character study of White, his artistic sensitivity. How is that mirrored in ‘Cec’ himself? There were clues aplenty in an annotated ‘Anthology of Nature poetry’ edited by Viola Meynell, published in 1941 by J Cape and given to me in the mid 1960’s. In one margin note he applauded a verse by Andrew Young for his “wonder in the beauty of minute things”. Perhaps because of this, it was the work of John Clare which drew his closest attention. ‘I love’, ‘the Fens’, Spring’s Messenger’, ‘Young lambs’ and ‘Skylark’ all get an approving tick by their side. Key phrases and words are underlined. ‘Plop’, ‘gurgling’, ‘buttercups, a glittering star or two’, the skylark’s ‘low nest, moist with the dews of morn.’
Finally, this boldly highlighted verse from ‘Robin Redbreast’ by WH Davies epitomises his affinity for the White like tendency for observational curiosity and heartfelt appreciation.

“How he sings for joy this morn
How his breast doth pant and glow
Look you how he stands and sings
Half way up his legs in snow!”

All this, Cec’s interest in White, the biography, his own neighbourliness, and immersion in the natural world were aspects of his later and retirement years in Combe. What had gone before? Well he had enjoyed a professional life as a lawyer, and been blessed with a happy marriage to his beloved Hilda. His severe, stiff legged limp, however, told of other stories. These emerged when I was looking through some of my mother’s own collection of newspaper cuttings and memorabilia. A folded photo copy of a letter dated July 11th, 1919 from the ‘RAF Training Establishment, Cranwell, Sleaford, Lincolnshire tells all.
In his early twenties Cec had joined the Queen’s Own Royal West Kent Regiment of the British Army. Attached to the regiment was a squadron of the Royal Flying Corps. As a pilot of biplanes serving on the Western Front in France, Cec was re – deployed from Farnborough to Poperinghe in France where his Squadron 6 conducted bombing raids on railways, engaged in observation of enemy artillery and undertook defensive air patrols. This service saw Cec rise through the ranks, being promoted from Lieutenant to Captain. It was not without cost. During his missions he was injured twice and as a result lost his leg. The letter from Cranwell takes up the story: undeterred and “in defiance of practically all precedent he at length succeeded in being sent out to France again for service in the balloon section” of the RFC. The balloon section of the RFC was integral to the ground army strategy. By pinpointing enemy artillery positions and movements, balloonists help direct manoeuvres; their ascent denoting imminent action, hence the portentous phrase ‘the balloons up!”
Cec and courage, then, were self evidently synonymous. Being a biplane pilot had obviously been a dice with death especially as pilots were not equipped with parachutes until 1918. Now as an observational balloonist with one leg he had all dice loaded against him. Though a parachute was available, his disability would have made it very difficult for him to exit from the balloon cradle if it had been hit. Undaunted he had volunteered to be hoisted 1000 feet in the air in a hydrogen filled highly inflammable ‘dirigible’, exposed to anti aircraft fire and attacks by fighter plane ‘balloon busters’. He served for eight months before being wounded a third time. The Cranwell letter concludes thus:
“The singular devotion to duty displayed by Captain Emden earned him in a particularly full degree the award of the Distinguished Flying Cross”.

As I’ve said, the only indication of this past was Cec’s stiff legged limp. Maybe his generosity and unassuming fellowship were in part rooted in his experience of war. Certainly it never flagged. In 1969 I left home to attend Cardiff University. Cec sent me a postcard picture of a heron . Wishing me luck, he added “ I rather think that interesting bird life is a bit to your south west- also Taff estuary, Penarth flats. The two reservoirs in the north of Cardiff don’t sound very exciting.”

On his death in 1980, his wife Hilda gave me a hard back copy of his Gilbert White ‘character study’ , which he had dedicated to her. In it she wrote : “to Chris in memory of someone dear to us both.” 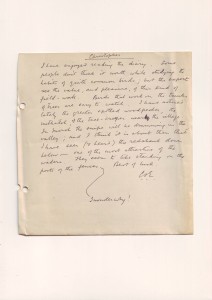 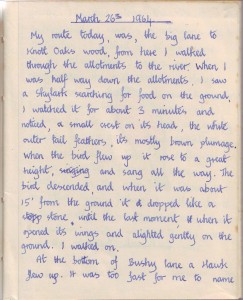 letter to C S Emden re award of DFC