‘LE BOTIN’ AND AN ‘UNEXPECTED EVENT’

“Inspiring Impressionism” was the title given to a recent exhibition of art at the National Gallery of Scotland in Edinburgh. It claimed to bring together for the first time paintings by Monet, Van Gogh and Daubigny. “Who” I hear you ask, “was Daubigny”? Surely, a super show of Impressionists requires a Pissaro, Degas, Sisley or Renoir to make up a stellar triumvirate? Well at first sight I would have agreed that to be true. Yet by the end of the exhibition I would have arrived at a different conclusion. Through a careful juxtaposition of paintings by the three artists a fascinating story, with Daubigny at its heart, is told. It is a story of how one man’s lifetime of work inspired others to follow and express their own unique geniuses.

Painting at locations on the Normandy coast and around his home at Auvers near the river Oise, Daubigny was the first to explore the themes, techniques and formats which were to become the hallmarks of impressionism. Moreover, this groundbreaking work not only won him the respect of other artists but inspired them to follow in his footsteps. In the cases of Van Gogh and Monet that inspiration took on highly specific forms. Van Gogh did literally follow in Daubigny’s footsteps and in his later years took up residence in Auvers. The wheat fields around the village became the subject matter of some of his most revered works.Finally just before his death “ in homage to the artist he had admired all his life and who had given him new inspiration in Auvers” (1) Van Gogh completed three paintings of Daubigny’s garden.

As for Monet, Daubigny bequeathed something less obvious though more tangible. And there it was on the gallery floor : a replica of “le botin,” Daubigny’s water borne studio! Powered by oar, sail or towed by a tug boat, “le botin” was Daubigny’s way of immersing himself in his favourite setting, rivers. The view from the boat opened up the broad expanses, their light and shade, the sense of realism which he wanted to capture. Monet was so taken with this ploy that he too acquired his own ‘botin’. His picture ‘Early morning on the Seine” with its mid stream vantage point realised his aim and Daubigny’s too of giving the viewer the “sensation of being in nature rather than observing it from afar.”

Knocked out by the exhibition, I arrived at a plan of my own. Stellar weather on November 1st with blue sky, warm sunshine and a faint breeze illuminating the autumn colours saw it put into action. I cycled to Yetholm Loch and walked to the old boathouse nestled beneath a chestnut tree.(2) From there I launched the large rowing boat and set off on my own ‘botin’ adventure.

Earlier posts have described the loch. Suffice to say that on this day it glistened in all its glory as I rowed the boat to the far end where I dropped anchor.From the gently bobbing ‘botin’ I sketched the water, moss and hills beyond. A mesmeric two hours of subtle changes of light and gentle lapping of water against the boat quickly passed. I took a break, tea, jam sandwiches and picked up my binoculars for a backward look. In an instant a large gathering of mute swans was brought into a sharp focus view. It was a moment reminiscent of that which Yeats’s observed at Coole.

“ The trees are in their autumn beauty,
The woodland paths are dry;
Under the October twilight the water
Mirrors a still sky.
Upon the brimming water among the stones
Are …….. well not Yeats’s nine and fifty…… but a hundred swans.”

Moreover, not only was the swan gathering twice as big but it was accompanied by a solitary companion. Taking it all in, I couldn’t believe my eyes. There it was, a bird I had first seen fifty five years ago on a picture card. It had been obtained from a packet of Lyons tea and formed one of forty eight pictures in their Australia edition of their Commonwealth Series of collectible cards. But there was no mistake, how could there be, for there amidst the vast white throng was a large charcoal black bird with bright red beak: a Black Swan. What a sight!

An hour or so later I had completed my water colour sketch of the water, moss, hills and sky all from the Daubigny inspired vantage point of ‘un botin’. (See Gallery). Rowing back to the boathouse I passed the black swan swimming serenely amongst its white relatives. Taking it all in, I allowed myself a whimsical thought. This ornithological first for me had come to pass after encountering the work and legacy of a bygone artist. It had reached out over one hundred and fifty years to help make for me this memorable day.

Some photographs of my day on ‘le botin’ appear below. They show the the loch. As for the swans? Well an unexpected event perhaps needs to retain its air of surprise and mystery. That black swan is best conjured up in the imagination. 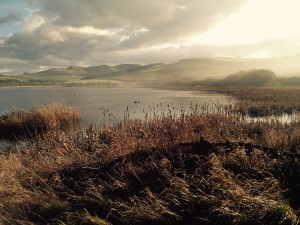 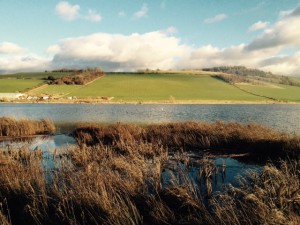 Postscript
Here is what the Lyons card had to say.
“The black swan is found only in Australia and is to be seen in varying numbers throughout the mainland and Tasmania. Most of the bird’s plumage is black, but it has dazzling white wing feathers which are hidden when the bird is on the water. When hatched, the cygnets are light grey. The first specimens of the bird roused great interest in Europe when they were taken from Western Australia in1697 by a Dutch explorer. It was the black swan which gave its name to the river on which Perth is situated.”

The swan on the loch was most likely an escape from someone’s private ornamental lake.

Since the surprise of its discovery, the term “black swan” has come to serves as a metaphor for any unexpected event.

Black swans, like all swans, mate for life. “They teach us how to protect our loved ones…the ability to protect those we care for is a gift and an ability; black swans emphasise it.” (www.wildspeak)

Hence as Yeats observed at Coole :
“Unwearied still, lover by lover,
They paddle in the cold
Companionable streams, or climb the air.”