Near, Further and Afar.

Near : An early morning walk to Yetholm Loch on June 14th revealed a placid, tranquil scene. Seventy mute swans were swimming idly, unmoved, unhurried, just leisurely floating . A shelduck, groups of mallard, a few gadwall, a heron and moorhen shared the open water. Nearer the hide reed buntings and reed warblers climbed up and down reed stems while swallows flew hither and thither.
The same evening I ventured out to Sunnyside wood. As I passed the pond, house martins flew, coot and tufted duck pootled about. Further on by the Bowmont oystercatchers piped noisily over the river shingles. In mid stream a dipper perched on top of a rock, its head bobbing and eyes blinking. By the time I got to the wood mist was billowing down from Staerough, muffling all sound.
A week later, on midsummer day evening, I settled down in Chestnut Wood at the foot of Staerough. It was bathed in a golden light which burnished the array of leaf greens to a glittering shine. Apart from the distant oystercatchers down in the valley all was quiet and still. That was until a slight rustle a few yards away drew my eye. A young deer emerged very slowly from the tall grass . Caught in the backlight of the descending sun its soft rusty brown coat, black nose and cream coloured cheeks and jaw all shone. For thirty minutes it browsed its way through the undergrowth, its deep black eyes and pricked up ears alert yet unperturbed. I watched until it nestled down out of sight allowing me to leave the scene without alarming it. 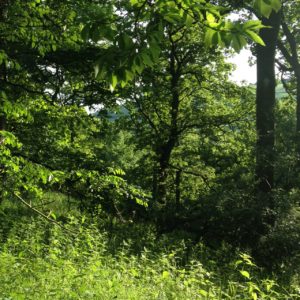 Back home I concluded my mid summer ‘near’ moments by counting up the birds that have nested or are nesting in the garden. Here is the list: Great Tit, Blue Tit, Two Starlings, House Sparrow (all in nest boxes) Wren, Wood Pigeon, Blackbird, Song Thrush. Guest appearances have been made by a female mallard on the pond , a Barn Owl and Chiffchaff.

Further : On June 8th I biked down the valley and sat beside the river Glen near Kilham. Warm bright sunshine glittered the shallows above which gnats flew. Blackcap song warbled out of the lush greenery followed by the bird itself. From its perch above the water it flitted out it to catch the insects. It was a good effort but it was left to the true exponent of the skill to really impress. A Spotted Flycatcher emerged from the leaf canopy above and snapped away with greater precision time and time again. It had been a couple of years since I had had such a good sighting. Satisfied I started to pack up and leave the scene until stopped in my tracks by a familiar sound: the shrill whistle of an approaching kingfisher. I froze and sure enough the bird zoomed round the bend and settled on a branch just ten yards away. Still and erect, the blues, orange and white of its plumage shone resplendently. A quick twist of the head and sudden dive saw it down in the water and back up again. No catch, a shake of the head and off over to a perch on the opposite bank. Completely relaxed it preened, scratched its head, peered down, then dived and headed off – only to return a minute or two later with its mate for a joint fly past. My best ever sighting of kingfishers!

Afar : “It’s a wonder of the world”, the skipper of the Sula proudly proclaimed , as he steered his craft towards our destination; the Bass Rock. And he was right. Monumental above the north sea, the rock was engulfed in Gannets. It was a staggering sight. 150.000 large white birds either ensconced on the rock, or filling the skies and water around it. The spectacle almost defied description. We were in the presence of the world’s largest colony of nesting Gannets. Close up the birds soft yellow neck plumage, piercing eye and finely etched markings could be fully appreciated. Above and out to sea the birds aerial mastery was breathtaking, large pointed wings gliding, wheeling, riding the air or folded into a seaward plummet, falling “like the heads of tridents, bombarding the green silk water.” (1) 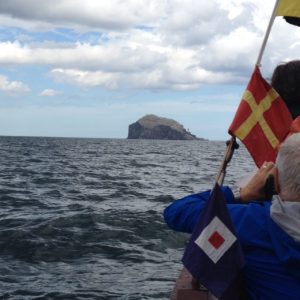 Approaching Bass Rock on the Sula 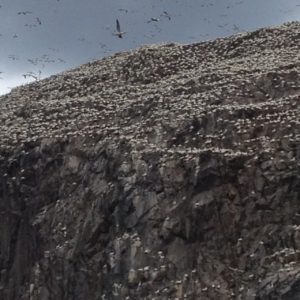 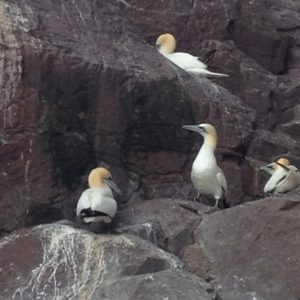 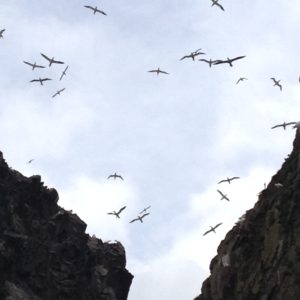 Gannets over the Bass Rock

Two weeks earlier, on June 7th, I had enjoyed another fine maritime experience at St Abbs on the Berwickshire coast. The day hadn’t started particularly auspiciously, however, as thick cold sea fog was drifting up and over the sea cliffs when I arrived. Because of this, I followed the inland path along the edge of Mire loch before heading back along the cliff tops. This brought its own delights. Wild flowers were in profusion, the yellow of the carpets of rock roses being particularly vibrant. Painted Lady and Skipper butterflies were on the wing. I clambered up the flower clad slopes to the edge of Hopes Heugh sea ravine where fortune smiled. A breeze blew the mist away, and sunshine beamed down to reveal thousands of sea birds. Guillemotts, Razorbills, Kittiwakes, and Fulmars were all present either huddled on the huge wave washed rocks ,nestled on the cliff face or zig zagging their way to and from the sea. Together they filled the air with a cacophony of sound. I witnessed the scene for a breathtaking twenty minutes before the mist returned and enveloped all. 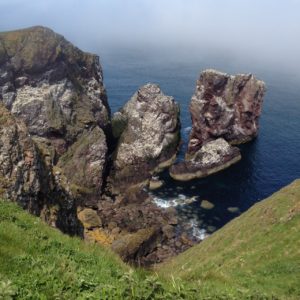 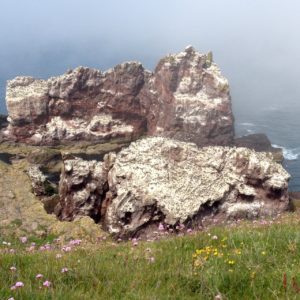 What else might one say about these ’near, further and afar’ bird moments? Well on a planet in which the natural world is under siege (2) they offer some humble observations. Firstly, I hope the accounts of the maritime world convey just how fortunate we are in Britain to be custodians of such special and unique environments. Are we doing enough to protect and nurture them? Maybe not. The skipper of the Sula informed us that the the Firth of Forth was “all fished out” and the birds fly as far as Norway in search of food. As for more localised habitats, tales of grazing deer, flocks of swans, agile flycatchers, and whistling kingfishers could be taken as pointers to what exists in other nooks and crannies of the natural world. Are we aware of the splendours on our collective doorsteps? Sometimes not and if so then such experiences could easily be lost. And loss is the ultimate fate we must guard against. The threat is real.
Yet tales from just one small wild garden could be viewed as an invitation to “raise ones eyes to where hope lies.” (3) Loss is not the only story line. Providing a little shelter and natural planting creates havens for birds and more. Wild gardens; havens of hope.

References
1. from Rhu Mor. Norman MacCaig.
The Poetry of Birds. ed Armitage.S. and Dee.T. Penguin 2011
2. During June 2016 there were several reports in the Guardian newspaper regarding the plight of the natural world at global and local levels. Topics included climate change, the decay of the Great Barrier Reef, the decline in sea bird colonies on St Kilda, decimation of hedgehogs through agricultural and gardening practices and the persecution of birds, small mammals and amphibians by domestic cats.
3. Monbiot. G. Guardian 29/6/2016.