THE COLLEGE VALLEY IN MAY

Mounthooly and the Hen Hole: with its welcome visitors and absent friends.

A round trip on my old Armstrong bike of twenty eight miles followed by a walk of three miles saw me completing my annual visit to the head of the College valley. May 3rd was a bright and breezy day, full of big cumulous clouds bowling along under a blue sky, though still chilly when the day was more shadow than sun. Gentle pedalling and periodic dismounts on inclines allowed plenty of time for mobile observations and birdwatching. Flora was evidently grateful for the warming sunshine with an array of yellows illuminating the journey: carpets of celandines and primroses in the woods at Pawston, deep golden gorse all the way up the valley and dandelions everywhere. So tough, so vibrant, so eager to splash their own sunshine everywhere, no wonder Walt Whitman was a fellow devotee:
Simple and fresh and fair…… emerging…….
Forth from its sunny nook of sheltered grass – innocent,
Golden,calm on the dawn,
The spring’s first dandelion shows its trustful face.”
Also showing up on this day were our summer bird visitors. Chiffchaffs called, a wheatear bobbed about and particularly welcome, the willow warbler in full rich song. With the bike parked at the International hostel at Mounthooly, I followed the College burn up into the hills and the Hen hole gorge. From the waterside I was treated to a rare sight of a more elusive migrant. Rapid wing beats, a single call, and a pure white rump was my fleeting encounter with the bird as it flew up from the burn rocks then round a bend and out of sight. A sandpiper for sure I surmised. The dark wings, white rump and secretive ways, however, caused me to question my initial common sandpiper identification. Later that day my ‘Witherby et al’ bird book put me right. “Like a kind of limicoline house martin” was its succinct description. Not sure what limicoline means as it does not appear in any of my dictionaries but it sounds evocative which along with the rest of the description tallied with my observations. No doubt then; a Green sandpiper en route to its breeding grounds in the north. 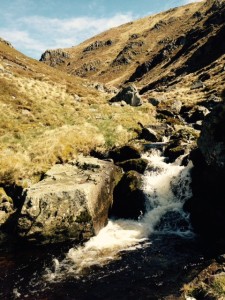 Up at the foot of the gorge, mist and rain funnelled down for a while. The rolling, tumbling burn, all spouts, plumes and lashed churning made for almost hypnotic sounds. I scanned the crags to see if any peregrines were out and about. Too wet and windy today I thought so expectation of reacquainting with them was low. Things changed though, for when blue sky reappeared to my left over Mounthooly, a falcon shape streaked away downwind just above the skyline. I rushed to my desired conclusion only to be instantly halted. The falcon had stopped dead in the teeth of the wind, a buckled, black zigzag shape hanging, quivering, above the moor. A kestrel then? Two more headlong dives, wings tightly tucked in, still had me unsure. Surely this was pure peregrine antics. Then an upward twist into the sun solved the mystery as the rufus back, kestrel trademark, shone. The peregrines might have been absent, but their smaller cousin had exhibited its own majesty and confirmed again what a special place the Hen hole is. 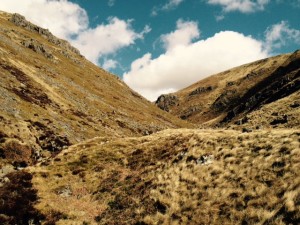 Back then to Armstrong at Mounthooly. As I prepared to remount and depart swallows flew around the hostel. Summer visitors were becoming ever more evident. Even so I was totally unprepared for the final moment of the day. From somewhere within the Dunsdale conifer plantation opposite an unmistakeable sound rang out , a special moment when and as G M Hopkins observed “the whole landscape flushes on a sudden at the sound” : a cuckoo announcing its arrival. I listened for ten minutes. Even with binoculars the bird acted true to form and kept hidden. Wordsworth noted the same long ago:
“Thrice welcome, darling of the spring,
Even yet thou art to me
No bird but an invisible thing,
A voice, a mystery”

A week later saw me on my way up the College valley again. My aim was to park Armstrong and climb up into the oak wood overlooking Hethpool. The former residence of Admiral Collingwood, Hethpool and its wood is a favourite destination at this time of year. (for more on this see related article under “And a bit more”)
The canopy afforded by the oak trees makes it perfect for bluebells to flourish. On the way I stopped at Kilham in the hope of seeing the kingfishers. No luck today on that front, though the hazy sunshine and balmy breeze encouraged others to take to the wing. Four species of butterfly cavorted above the verdant vegetation: orange tip, peacock, tortoiseshell and small white. I added a fifth later on up in Collingwood’s wood, a red admiral, as it fluttered its red, black and whites amongst the bluebells, stitchwort and sorrel. While it did so a bumblebee buzzed around, a buzzard mewed from afar, pheasants squawked and a pigeon cooed its lament. From deep within the wood a woodpecker drummed, accompanied by the descending cadence of willow warbler song; all mellow sounds filtering through the twisted oaks and its dappled light. 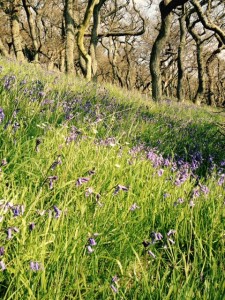 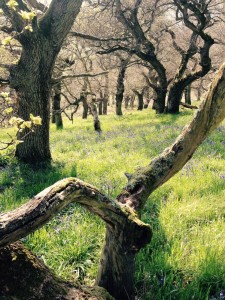 As I cycled home the words of a long time favourite poet were brought to mind as I took in the sunlit scenes. It was a long way from his beloved Shropshire but the words of A E Houseman rang true all the back along the Glen/Bowmont valley;
“Loveliest of trees, the cherry now
Is hung with blossom along the bough”
Bluebells, butterflies, cherry blossom and soft sounds. What a day!

References
1. Whitman.W. The First Dandelion. Favourite flower poems. National Trust. 2016.
2. Hopkins. G.M. ‘Repeat that repeat’. The Poetry of Birds. ed Armitage. S.
and Dee.T. Penguin. 2011.
3. Wordsworth. W. To the Cuckoo. Verse four. ibid.
4. Houseman. A.E. a poem from his collection entitled ‘A Shropshire Lad’
and included in The Collected Poems of A.E. Houseman.
J. Cape. 1967. Purchased then at a price of ten shillings and sixpence!

For more on Collingwood and his wood see an account of last year’s visit under ‘And a bit more.’ along with my drawing of it in the Gallery.

2 thoughts on “The College Valley in May”