“WHEN THIS OLD WORLD
STARTS GETTING ME DOWN”

How strange, or perhaps not, that in recent weeks it is this 1962 lyric from the Drifter’s rendition of a Goffin and King song that has been filling my head. Of course back then at the tender age of twelve, thankfully, it was the tune rather than the poignancy of the lyrics which grabbed me. Indeed it was that song and Carole King’s move from writer to performer which kicked off my immersion in the pop culture of the1960’s. I recall, as if it were yesterday, my trip to Oxford one Saturday morning in the bright red Slatter’s bus to purchase her chart topping single “It might as well rain until September”. Happy Days!

Now sixty years on from those formative years, it is her lyric from the Drifter’s rendition which has come back with the greater resonance. With Britain, literally, ‘the sick man of Europe’ with its plague like pandemic, the global inaction over climate change and Britain’s status as one of the most denatured countries on earth, well no surprise that “this old world “ is certainly wearing me down. Certainly from the lofty vantage point of advancing years one can only concur with the words of W G Sebald:

“if we view ourselves from a great height
it is frightening to realise how little we know about our species, our purpose and our end.” (1)

What can be done? In the song’s lyric the solution was to “climb my way to the top of the stairs (so) all my cares just drift away, upon the roof.” For me it’s not the roof I turn to but the top of the hill overlooking ‘Innisfree’. There, to continue the lyric, “ it’s as peaceful as it can be” and moreover with luck some bird life will eventually emerge to lift the spirits and offer a smidgeon of hope. And so it was on October 24th. First, from a hillside tussock, a small bird flew up to alight in a nearby hawthorn tree. A momentary shaft of sunlight caught its splendour: lemon streaked with umber, the yellow and brown colouring of the yellowhammer and here its beauty framed by orbs of crimson haws. Then further on downhill I walked beside the Bowmont, its rivulets meandering their way through its flood plain. I marvelled at its creative re-wilding powers, the grassland carved into pebbled sand banks and shallow lagoons. Binoculars spotted a small flotilla of mallards dabbling in one of the created pools. Suddenly, into the same field of view, a kingfisher flew, arrow like and blue, up onto a reed at the water’s edge. From there it peered into the still water then lightning quick it plunged in to catch a fish. Once the catch was savoured, the bird flew over to a gorse bush, this time revealing its russet breast, perched awhile then off in a rapid flicker of wings. Two resplendent birds, still at home in a wild place, and timely rewards for venturing up the hill and back down.
In fact it is not only hill top escapes with ‘birds’ which have offered succour of late. ‘Bikes’ too have played their part. On this October occasion it was a rendezvous with our daughter, Beth and her partner Nic which provided the cycling escape. Equipped with GIANT mountain bikes, courtesy of Rusty’s Cycle Shed in Oban, Nic and I circumnavigated the nearby island of Kerrera. In soft west coast rain, a short ferry ride took us over to the island where Beth, Barbara and dog Scruff set off to walk to the ruined Gylen castle, while Nic and I set off on the bikes in the opposite direction. Two and half hours later after a rip-roaring romp along a pebbled track, through bogs and running water we all met up for the return ferry at 5.15. A great day away from it all in a wild place. 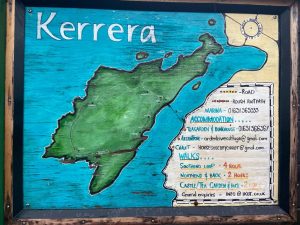 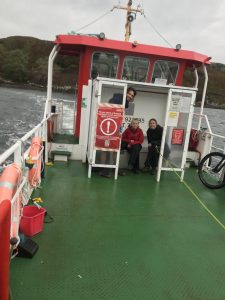 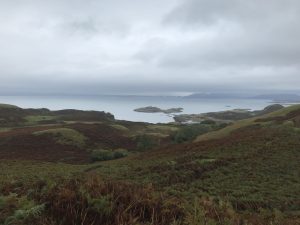 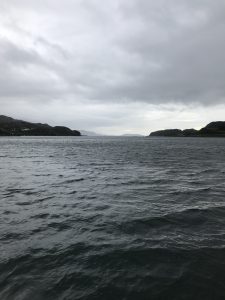 And of course, as a fellow gardener once said “ when the world wearies and society ceases to satisfy there is always the garden.” (2) Certainly the October garden offers plenty of delights, distractions and jobs. Beneath a towering golden Cognis Vitae climber, apples were picked, grapes harvested from the greenhouse, Scruff helped to dig out an old tree stump, Nic lopped off a lot of surplus growth and Beth planted wallflowers, sweet williams and forget me nots and tulips. As a result another year beckons for “the garden is never dead, growth is always going on.” (3) It is claimed that it is the planting of bulbs which offer a particularly pleasurable anticipation of the garden to come for “ it is a greater act of faith to plant a bulb than to plant a tree…..to see in those withered colourless shapes the subtle iris reticulata or the tight locks of the hyacinth” (4) and now for us the beauty of the erect closed orbs of tulips. 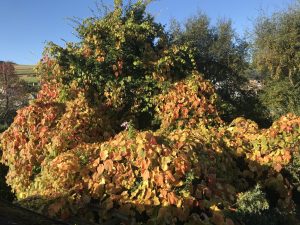 Respite then, and hope too, from immersion in tried and tested pastimes. Maybe, on a global stage, hope for the planet will emerge from the imminent climate summit in Glasgow. For sure the world’s young people are calling out for change.

Are the ‘adults’ listening? What will it take to make them tune in? Not for the first time it is Greta Thunberg who spells it out;
“all it would take is one world leader or one high income nation to decide to be honest, to truly treat the climate crisis as it is. One leader who counts all the numbers and then takes brave action to reduce emissions at the pace and scale science demands……Who will the leader be?” (5) 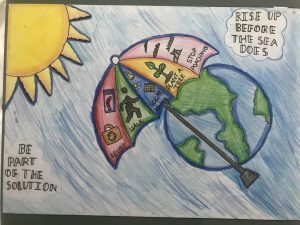