More often than not the cargo I draw on when writing recalls old songs and lyrics. It’s not that they were ever neglectfully squandered but simply that they were overlaid by life. Anyway, Mackay Brown’s words rang true this warm September week. While lifting potatoes for storage, I began to reflect on the passing of the seasons. It was a matter of pure word association at first for as the season’s crop of Maris Peer appeared it was a song from the group, the Four Seasons, which hummed away in my mind: ‘Rag Doll’. (2) In an instant I was back in teenage years tuning in to Brian Mathews wireless programme, ‘Saturday Club’. After listening to this haunting, plaintive song song I had taken the next bus to Oxford and headed to Smiths to purchase the 45rpm single record and add it to my burgeoning collection of three Beatles singles.

As I continued with my horticultural day with walks around the garden more of that musical cargo and its seasonal thoughts came into play. “Sweet seasons on my mind”, the Carole King song from 1971, (3) was the next lyric to surface. “ A life in the open, a life in the country” she sings adding “it sure does appeal to me.” And I could see why. With sweet peas now nine feet high, fuchsias in full pendulous splendour and autumn crocuses looking up to ripening apples, this particular sweet season appealed to me too. With grapes filling the greenhouse, blackberries shining on their trellis, and hazel nuts hanging over the chicken run, the fruitfulness everywhere hinted at the seasons end. How strange that this moment should trigger recollection of yet another old L.P. buried deep in the collection, ‘Seasons End’ by Marillion.(4) Yet the mellowness I was associating it with took an unexpected turn as I played it again. As the lyric of the title track filtered through melancholy crept in;

“We’ll tell our children’s children why
We grew so tall and reached so high
We left our footprint in the earth
And punched a hole right through the sky.”

Over the following days, articles in the Guardian catapulted this sentiment from 1989 into the here and now with a vengeance. Humankind’s footprint is now so heavy that a new geological age is now underway.(5) In tandem with global warming we have bequeathed a new era on the planet. Geologists claim that the proliferation of radioactivity, concrete and plastic is laying down a new layer on earth. Consequence? Globally, “a tenth of the planet’s wilderness has been lost in the past twenty five years” (6). Here in the U.K. one in ten of our wildlife species are threatened with extinction, a trend that leaves us as “among the most nature depleted countries in the world”; a nation that gave the world Shelley and his “To a Skylark,” is now sending the bird to oblivion. There is, according to one commentator, “a great acceleration towards a bare grey world.” (7).

From humming ‘Rag Doll’ my ‘cargo’ had momentarily coalesced with the joys of late summer before washing up as sobering flotsam. “Was there no respite”? Another walk around the garden offered a modicum of hope. How? Two humble plants were shining like beacons. One was an intended planting from a single packet of seeds, the other an uninvited yet welcome guest. The former was the climbing nasturtium. What a year for its orange, red and yellow blooms climbing and adorning just about everywhere. Then for a final flourish their big floppy leaves offering a timely source of food for a host of white butterfly caterpillars. And the latter luxuriant? Convolvulus or bindweed had run a welcome riot, covering the chicken run, mingled with clematis and fuchsias, festooning all with its pure white bells. For me, together, these flowers offered a small yet welcome reminder of the power of nature and its capacity to flourish, given the chance. Seeing it all, and suitably heartened, a final bit of musical cargo materialised and Clapton’s “let it blossom, let it grow” (8) chugged away. Moreover, we can all play our part in this planetary healing process as Gary Snyder affirmed (9);

“Find your place on the planet. dig in and take responsibility from there.” 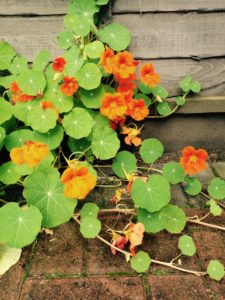 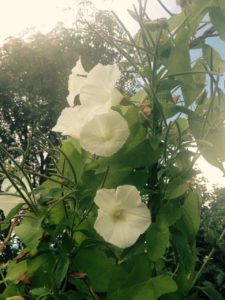 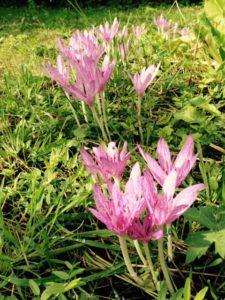 Now on a recent visit to Holy Island I happened across a bit of “digging in” which provided a timely boost to this sentiment. Walking back from exploring the dunes and shores of Lindisfarne, I passed by the landward side of the castle. To my right I came across a walled enclosure. Peeking over its gate I encountered an oasis of colour. It was a walled garden full of sedum, hollyhocks, sweet peas, cornflowers, santolina and nasturtiums too. A plaque informed me that I had entered a garden created by Gertrude Jekyll back in 1911. This famed horticulturalist had grouped plants in patchwork blocks with taller ones behind against the walls. Set here on the edge of the North Sea, protected from the wind, Hyde had “found a place” and let nature flourish. It was an inspiration and timely affirmation of “seasons sweetness”.