‘Wild Thing’ was a top ten hit in 1965 for a west country ‘group’ called The Troggs. Not many people, even those of us of a certain age, realise that The Troggs achieved more top ten hits than other luminary outfits such as the Who and Bruce Springsteen. It must have sunk into my music memory bank because it was their lyric and tune which I hummed earlier in the year as I set about my guerrilla re-wilding efforts. Now looking back I can only wish that those efforts had reached the heights of Reg Presley and The Troggs ‘wild thing’. Sadly I can report that a number of factors emerged to scupper the endeavour.
The first setback came when the hillside enclave home to birch, holly, scots pine and rowan was unexpectedly opened up to sheep. Tree guards were trampled, saplings chewed up. As for the willow rod plantings, well the May drought saw them shrivel. And finally, what of the oystercatcher protective signs? Marauding cattle used two of them as scratching posts and wrecked them, while a third disappeared completely. Had someone been annoyed at the polite request to “please keep clear”? The birds took the hint and have vacated one of the sites. Still there has always been plastic to pick up with tree guard removal now recorded at thirty bin bags.

Throughout this time spring was springing up beneath unseasonably bright sunshine which coupled with the enforced Covid lockdown meant that our locality could be explored even more closely than usual. Hence the first thing to report is a note of re-wilding optimism along the lines of “this is one I did earlier”! Below are pictures of a rowan, willow, and a giant horse chestnut. The latter came north with us in 1982 and now stands at fifty feet high . 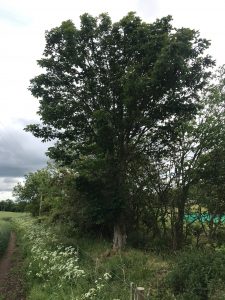 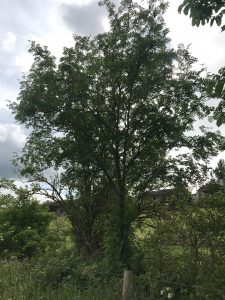 With this years wider efforts having floundered somewhat, the wild garden at Innisfree has taken centre stage.. Last years plantings have evolved with the meadow area particularly verdant and diverse. 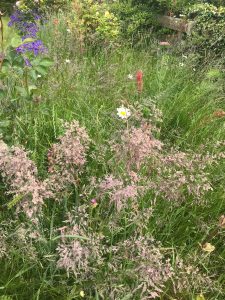 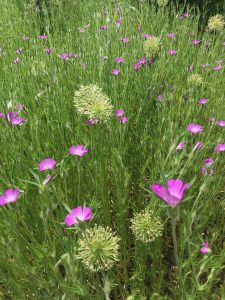 Bird life has been at home too. Blue tits have reared a brood in one of the nestboxes, as have sparrows and starlings. Lockdown and warm weather has seen us sitting beside the pond a lot. More than ever we have seen that it is a magnet for birds, though in the case of blackbirds in an unexpected way. With hungry fledgelings to feed the parents have discovered that it is an important source of food for them. With great alacrity we have watched them hop to the pond’s edge and pluck water snails from the surface. Bolder forays saw them fly into the middle and alight momentarily on lily pads or water weed and forage for more. However, an emboldened fledgeling, intent on mimicking its parents, followed suit and found itself in near fatal ‘deep water’. Frantic flapping alerted us to its slow sinking. Only quick action with a nearby net saved the day.
The net had been on hand because a pond survey was underway that afternoon. Frog numbers have declined over the past few years and so I have needed to supplement our spawn with imports from local ponds and also from Jill and Hywel’s pond in mid Wales. For all this new spawn though we had not seen many tadpoles, hence the pond dipping day. We needn’t have worried. From deep in the mud big tadpoles emerged. Not only that but each dip revealed other aquatic life; water boatmen, a huge silver diving beetle, two ferocious looking dragon fly larvae, a damsel fly larvae and most hearteningly two smooth newts. 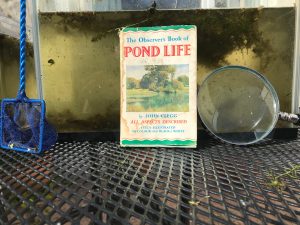 On all fronts then the Innisfree wild garden is in good wild health. The thing is though how wild can a wild garden get? A recent leap of the imagination has taken it to another level. We invited our young grand daughters, living in Bali, to explore it in a video and to tell us what creatures and animals they could discover and to then tell us where else in the world they live. The pictures below will tell you the rest. 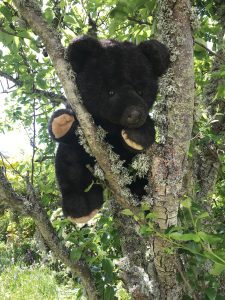 Bramble bear in the wild garden 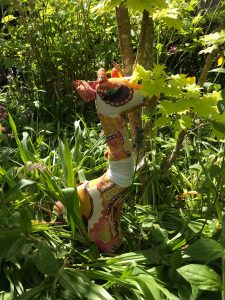 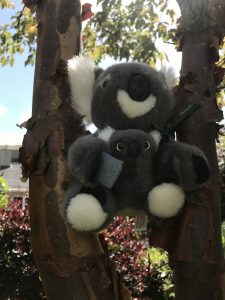 Koalas in the wild garden 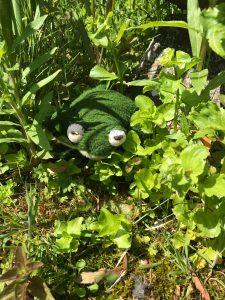 Froggy in the wild garden

This is what they said watching the video.
“What long grass you have”
“What’s that?’
“It’s a bear, a giraffe, a koala with a baby”
“Giraffes live in Africa, koalas live in Australia”
“It’s a frog. I want to see it hop”
“It’s called a wild garden because there are animals in it.”

Young naturalists in the making and a symbol of hope in these dark times. Indeed there was a similarly heartening story this week. An Irish teenager discovered tadpoles in a shallow pond on the verge of drying up. She collected them up in numerous visits and resettled them in a paddling pool complete with water weed and fresh water. She shared her rescue mission on a Tik Tok video. 535.000 other young people all over the world have watched it and been inspired.