LIFE IN THE FAST LANE

“What have you been up to Dad?” inquired our daughter Beth when she phoned. “Very busy” was my reply and I gave her a quick run down of recent events. “Wow, life in the fast lane” was her verdict though delivered with a chuckle. I laughed too given the nature of the days out I had briefly described. What really intrigued me was her reference to the 1976 Eagles track from the album, Hotel California. The Joe Walsh vocal must have seeped into her mind as it played while we were getting ready to walk to primary school and now resurfaced twenty three years later! Such is the power of a classic album.

1.
It was on September 16th last year that I cycled to Ford Moss on Specialized. The tour of Britain had recently passed that way and the route had still retained welcoming signs in the shape of old decorated cycles. I had felt part of this bigger picture especially as I was out on my own new bike. A pleasant afternoon was spent looking down on the moss and up into the sky where buzzards and a kestrel soared and swooped. I marked the occasion with a photo of the bike leaning against a post. It formed the opening image to the bikes section of my web site.

A year on I decided to revisit, this time on my first ever bike, Armstrong. The photo below is at the same spot as last year. 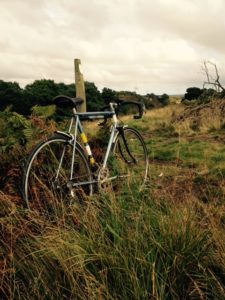 A golden light flooded the moss and moor behind me as massive grey and white cumulous clouds billowed in from the sea.
The moss is an unusual place in that at one end stands a tall chimney, a relic of a former coal mine. At the other end are half a dozen wind turbines. Together they mark the passage of time and the never ending quest for energy. Between the old and new sits the lowland peat bog, flanked by towering oak and scots pine on one side. It is a wild habitat, and welcome evidence of natures power to re-wild and coexist with the new. 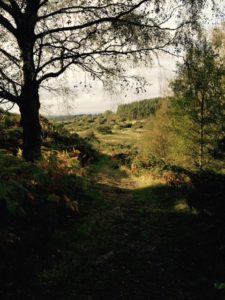 2.
Apples had always been a feature of growing up in the Oxfordshire village of Combe. My Aunty Enid had an orchard which provided us with the first eating apples, “Beauty of Bath” while our neighbours, the Emdens, furnished us with huge Bramley cooking apples in return for us harvesting their crop. The cooker which kept best though, long into the winter, was provided by my grandparent’s Blenheim apple tree which grew at the edge of Knott Oaks wood of which they were custodians. At the heart of the village stood Andrews’s orchard. We passed it every day on the way home from the school bus drop off and each season we vaulted the wall to partake of an occasional “scrumping” of Worcester Pearmain eaters. Apple days then had been plentiful.

It was then,naturally, a big bonus that our garden up here at Innisfree should have an assortment of twelve apple trees, some small, others large. They have always been bountiful though beyond the cooker-eater distinction their exact identities have remained unclear. This year we attempted to put that right by attending the annual “Apple Day “ at the nearby Harestanes centre. We arrived to find a many types of apple on display and in the absence of an apple guru we set about matching our apples with the exhibits. It is a harder, less obvious process than it sounds so what follows is the result of not an exact science.
We have four cookers : Alderman,White Paradise (2), Bushy Grove, and Lady Henniker.
one eater/cooker: Winter Pearmain.
five eaters: Filkiington Pippin,Falstaff,Thorle Pippin,Suntan, Brownlees Russett.
Whether all this is strictly true or not is by the by perhaps. Delicious Apples have spanned the years. It’s just that now we have twelve more evocative names to savour. 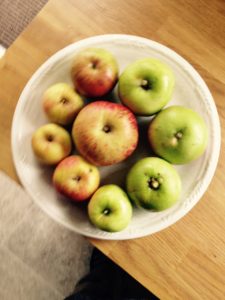 3.
When visiting Holy Island a line of tall posts way out on the mud flats always catches my eye. Sometimes diminutive figures can be seen moving slowly beneath them; walkers completing the final three miles of St Cuthbert’s Way. Cuthbert had started his religious life at Melrose Abbey before venturing out to take christianity throughout the north. He became Bishop of Lindisfarne, or Holy Island, in 684AD before retiring as a hermit to the Inner Farne island. St Cuthbert’s religiosity calls out across the mudflats and pilgrims heed the call.

“What about the quick sand, the unexploded wartime ordinance, the tides?”, I think, all of which visitors are alerted to in signs old and new. Pilgrim faith obviously sidelines such thoughts.
For me, what assuaged my misgivings, and spurred me on, was the prospect of being out there amidst it all with the multitudinous mud flat bird life. I parked the car and took the old Armstrong bike out of the back and cycled over the causeway to the island. I had around seven hours to complete my ‘pilgrimage’. I left the bike at a cafe next to the post office. Over a cup of coffee I casually inquired about my proposed walk. “Just follow the posts then? Not too muddy? How long would it take?” “Depends on how fast you walk.” This wasn’t that reassuring . Even without sticky mud, my dodgy left hip might be leading me into potential trouble rather than out of it. Still I was committed now so off I went.

The east coast ‘fret’ or ‘harr’ was set in for the day though the posts were still visible which was a relief. Within a hundred yards I was into my stride, a couple of hundred more and I was in a different world; a world of birds, flocks of fast flying waders, leisurely plodding curlews. The posts stretched on into the mist. After an hour I was all alone. A haunting sound drifted to me from way out over the mud and sea beyond. Binoculars just about penetrated the grey light and offered an answer. It was the call from hundreds of seals lolling on a long sand bank. Cut off from all but sound, I was in a dream world of redshank and curlew trilling and seals soft mewing. It stayed with me for a further hour while squelchy footsteps between barnacle encrusted posts led me back to the start of the causeway. There I was welcomed by a nice reminder of an earlier adventure. The white egret from Beal Sluice was probing the shallow pools. 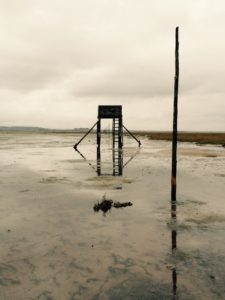 Watchtower on the mud flats 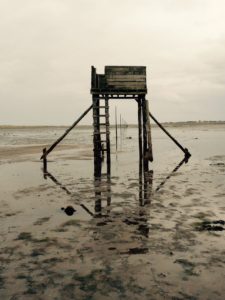 “All along the Watchtower”

I drove back over the causeway, with time to spare for a late lunch, and retrieved Armstrong. This day’s sojourn on Holy Island had been a special one. “Life in the fast lane”? Well yes!