BIRDS, BIKES, BOTANICS and more in the RAINBOW NATION.

With Barbara’s sister to visit and our daughter to meet at the end of her African adventure, South Africa beckoned. Our timing proved to be fortuitous for while we were away the whole of the UK was gripped by a prolonged icy blast and carpeted in snow.
After a month travelling in the ‘Rainbow nation’ chatting to its peoples, and experiencing its diverse geography and climate, one could write a book. Well, as you know, my web site is more limited in scope and that will continue to be my focus. Still having said that it must be said that a good full length book would be full of anecdotes describing the nation’s people, friendly, welcoming, eager to chat while at the same time experiencing the pains of extreme inequality.

What then does ‘birds, bikes and more’ particularly have to say about this month long sojurn? Highlights of the fifty three different birds spotted, the beauty of two natural world heritage sites and the wonders of life on a game reserve should make for an interesting read.
As guests of Barbara’s sister, Chris and her husband Graham, we spent ten days at their home on the shores of the vast Vaal Dam lake and reservoir. Filled by the waters of the Vaal river, its five hundred mile shoreline is home to a variety of birds.

Blacksmith Plovers were particularly striking with their black and white plumage. Equally memorable were the visitors to Chris’s shoreline birdtable; a flock of ten crimson Bishop birds. 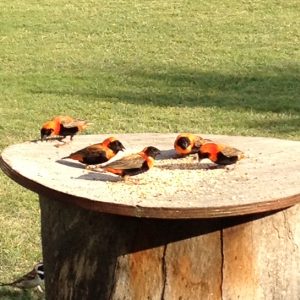 Our drive south to their coastal residence in Margate traversed vast rolling uplands. The roads were fringed with pink and white cosmos flowers and the fences and telegraph wires occupied by lesser Kestrels and the amazing Widowbird. Predominantly black, with long trailing tails they resembled a child’s kite with its streamers billowing.

On March 4th we left Margate and its stunning coastline and headed off for our four day stay at the Shamwari Game Reserve. Sightings of the animals there was a privilege. Black and white Rhino, herds of Zebra, Impala, Kudu and Buffalo all came our way. Earlier in the week, back on Margate beach, the former had been celebrated by a sand sculptor; a man with modestly self proclaimed “God given gift.”

Our Land Cruiser moved on until we found families of elephants gently munching at the veldt foliage, and enjoying a mud bath. Huge tortoises ambled about and Warthogs ran like the wind. Our ranger, Mino, was an adept tracker. Lions were located feeding and on another early morning excursion a family group emerged, up close, and started out on a ramble. We caught up with them later, fast asleep.

Our morning excursion on March 7th proved to be particularly memorable and prompted a reminiscence of childhood. Fifty six years ago, me, my brother Nick and our cousins Trev and Lawrence, played together. Every summer Sunday morning we played cricket with our fathers and grandfather in a glade in Knott Oaks wood, Combe, Oxfordshire. We shared too some memorable adventures, long cycle rides and a sail down the Evenlode river on large inflated car tyre inner tubes. All this outdoor fun was encapsulated in a mini gang identity, the existence and details of which was secreted in a slim tin, hidden deep in a cotswold dry stone wall. That tin has remained there till this day. Why mention it now? Well above the names of ‘gang’ members was written the following:
Gang name Kestrel
Password Cheetah
Now all those years later, as a husband and wife gang of two, that name and password literally came alive in dramatic fashion. A family of six Cheetahs were tracked throughout the morning. The mother led the way. off spring following behind. Their ears were pricked up, their bodies tense as they gradually quickened their pace. They were on the prowl! All morning we watched the drama unfold as they moved around the veldt until later we found the family huddled under a bush feeding on the kill the mother had made. 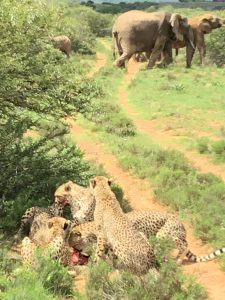 Later, up on higher ground, a large flock of birds suddenly filled the sky. There were about forty and I couldn’t believe my eyes. They looked and behaved like kestrels. How could that be, a flock of falcons? There was no doubt though from their behaviour. As they rode the air It was a pure Gerard Manley Hopkins moment writ large:

“dapple-dawn-drawn Falcon in
his riding
Of the rolling level underneath him steady air, and striding
High there, how he rung upon the rein of a wimpling wing
In his ecstasy! then off, off forth on swing,
As a skate’s heel sweeps smooth on a bow-bend: the hurl and
gliding
Rebuffed the big wind.” (1)

Cheetahs and Kestrels; from the Cotswolds to the South African Veldt!
Later over dinner our ranger, Mino, was eager to share our moment with colleagues. It transpired that their ornithological knowledge extended beyond his and though Kestrel -like this flock had in fact just arrived from South East Siberia and Northern China and were the gregarious migratory Amur falcons, a close relative of the Red Footed Falcon. It was good, as an ornithologist, to get the facts straight though inwardly I mused “what’s in a name?” For me the magic moment had transcended time, a good feeling which drew on the words of Viktor E Frankl:
“having been is the surest kind of being”

My final safari ‘birds’ moment that I want to share again occurred up on the high veldt. A pair of large, long legged, black and pearly grey birds with red face and shaggy, spiky plumage were probing the heath like vegetation in a series of giant steps before gracefully taking flight. An earlier perusal of my Audubon guide told me they were ‘Secretary birds’, the snake eagle of Africa. What a sight, enhanced the next evening when Mino took me on a solo visit to their treetop nest site.

Thursday March 8th saw our daughter, Beth arrive to meet us. She and Nic had been on a four month African adventure. Travelling down the Garden route was to be her finale. And what an experience it proved to be. Three world heritage sites were explored, Robbergs peninsula at Plettenberg, Kirstenbosch Botanical garden in Cape Town and Table Mountain itself. From the former we we spotted huge numbers of Fur Seals and White Necked Ravens, in the gardens glimpses of Sunbirds and high above Table Mountain, two eagles soaring. On her run up to the ‘Table Top’ Beth was fortunate to have her path crossed by the elusive cat, the Caracal. The pictures below aim to capture a little of these special places. 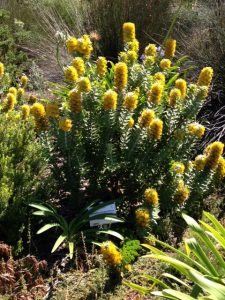 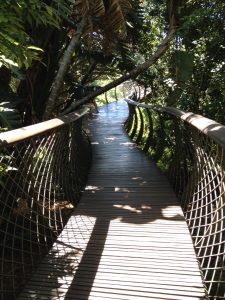 A particular highlight of our Garden Route adventure was the stay at the Emily Moon hotel overlooking the Bitou river. Canoeing up stream before breakfast on Sunday March 11th took us into a tranquil water world. Becalmed we watched the natural world in full swing, ducks, cormorants, dragonflies were all around while above five Pied Kingfishers sallied forth from their tree top perch. 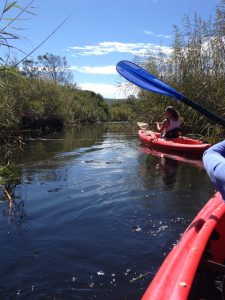 En route to Stellensboch and Franschoek in search of the famous Chocolate Block vineyard we stopped at Swellendam. Our stay at the Jan Harmsgat farm was notable for many things not least of all the fine food and wine. What I want to report though for the purposes of completion of ‘birds, bikes’ is that it offered the prospect of a little off road biking. Before breakfast I was able to mount an old Raleigh mountain bike and follow mother and daughter on their jog through the olive and pecan tree groves. 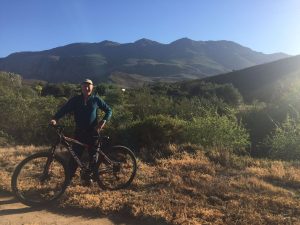 Off road at Swellendam, South Africa

So February and March 2018, two months of adventure with lots to recall: family reunions, birds of course, botanical marvels, magnificent animals, a Raleigh reunion, spectacular scenery and a pleasant echo from the past.