“We are all islands in the sea, separate on the surface but connected in the deep” (1)

Earlier this year, I picked something from my archive of personal memorabilia which prompted more than the customary smile of recognition and brief perusal. It was a small ‘album’ entitled ‘Bird Portraits: a series of British Birds illustrated and described by C F Tunnicliffe R.A.” It was priced at six pence, the old fashioned silver ‘tanner’. This, however, was not a publication which could be purchased in its entirety. No, the booklet contained eight pages of rectangular shapes and was offered “in the interests of education” by Brooke Bond &Co Ltd. The rectangular spaces and the education they promised were for “picture cards… given free in every Packet” of the Brooke Bond products, ‘Choicest Edgelets and P.G. Tips Tea.’ Luckily my family were great tea drinkers. Dad alone took two massive thermos flasks to work each day so together we got through two packets a week. Collecting the cards was a popular pastime in the late 1950’s and hence gave rise to a lot of playtime swopping at our village school. Those that couldn’t be swopped were used in a playground game of ‘flicksy’ whereby cards were flicked at at a specific target with the owner of the card nearest deemed the winner of all cards ‘flicked’. After much tea, swopping and ‘flicking’, my album was complete. My first bird book. And it remains a classic . The portraits have a timeless perfection, with each bird perceptively placed in its typical setting,its description succinctly expressed in poetic prose.
Looking through the album, I recalled encounters with some of the birds, the pictures and text connecting the young and old me. Here are three of those reflections.

Wood Pigeon. “A beautiful bird”, wrote Tunnicliffe, and at home here in the Abies Koreana behind our garden pond. Back in time at number three Church Cottages, Combe, they used to wake us in the morning with their refrain of “my toe bleeds Betty”. At night we might have them for tea in a pigeon casserole courtesy of our gamekeeper grandfather and very tasty they were too. He had a special wooden whistle which mimicked their call in order to lure them to the gun. I don’t share that fact with my grand daughter when she blows into it! Instead as a birdwatcher I echo Tunnicliffe and remark on the delicate green sheen of their necks, and the clap of their wings in flight.

Gannet. This was a picture which particularly captivated me as young boy. I actually thought that one day I would like to see their Bass Rock home which Tunnicliffe referred to. And I did, up close, a couple of years ago by way of a boat trip out of North Berwick. It was an incredible experience being among hundreds of this incredible bird. All along this north eastern coastline I have watched them gliding, soaring, and diving. Their white plumage is the purest of whites especially when caught by the sun above a grey, blue sea. Watching gannets then was a boyhood dream which came true.

Kingfisher. “A small brilliantly coloured bird of the waterside.” Whether by the Evenlode of my childhood or here by the Bowmont/Glen, the thrill of seeing the flash of blues, the arrow fast flight and the spear like dive remains truly special. Tunnicliffe adds some informative observational detail to his appreciation of the bird’s beauty inviting birdwatchers young and old to pay close attention! “A feeder on fish which it catches by plunging from some branch or other perch, headlong into the water. It carries its catch, held crosswise in the bill to a perch and after adjusting it so that the fish is pointing inwards, swallows it whole.”

So evocative was my leafing through the Brooke Bond album that I was encouraged to revisit my boyhood interest in art and drawing. Indeed back in 1961 I was dubbed “a good worker” on my school report and rewarded with a top of the class ranking. Could that interest of long ago be revisited? It was the Tunnicliffe portraits that encouraged me to have a go so I took some kit and cycled to Kilham where I sat by the Glen to sketch kingfishers in their habitat. The efforts appear below. 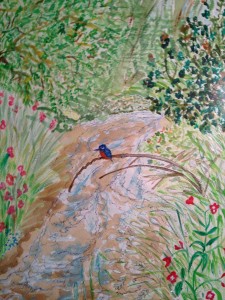 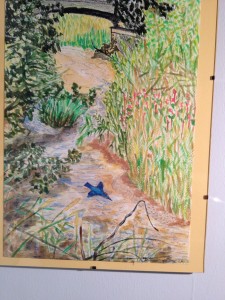 There was no Goshawk in the Brooke Bond album album. Knowledge of this bird has come much later in life courtesy of the TH White classic (2) and the more recent ‘H is for Hawk’ by Helen Macdonald (3). From what I’ve read in those works I am probably unlikely to see this elusive bird in the wild. Still in her much applauded work, Macdonald delves deep into its world. Her training of her goshawk, ‘Mabel, leads her down many paths. For a start she immerses herself in the world of White and his relationship with his hawk, Gos. For all the dark side of the man and his endeavours, she writes: “it is that joy, that childish delight in the lives of creatures other than man that I love in White”(4). It is a joy she too experiences. Here is just one example. Describing Mabel, she writes:
“ The feathers down her front are the colour of sunned newsprint. of tea stained paper, and each is marked darkly towards its tip with a leaf bladed spearhead, so from her throat to her feet she is patterned with a shower of falling raindrops(5).” Reading this I felt as if I had seen a Goshawk for the first time, so vividly had she shared her attachment.
Ultimately, Helen Macdonald’s delight in the natural world and passion for hawking serve a more profound purpose. Over time through both she comes to terms with the death of her father and move beyond her grief.

“now that Dad was gone I was starting to see how mortality was bound up in things like that cold arc-lit sky. How the world is full of signs and wonders that come and go and if you are lucky you might see them once, twice. Perhaps never again.(6)”

Acknowledging transience and loss, Macdonald rediscovers the joy of the moment, the here and now, and especially the value of friendship. “ I love you guys,” she blurts out to Stu and Mandy, in thanks for their looking after Mabel and adds to herself ‘I am not just thanking them for looking after my hawk.(7)”

Reading this touching moment. I was drawn in a vague unconscious way to remembrance of two lyrics, poetry in fact, from bygone rock music. Joe Jackson filtered through first: (8)

For Ruth Padel the fact that some words lead to others, bringing minds together, spanning years, is no surprise for “ poetry is a royal road out of and into the unconscious, the deepest form of communication.” In short “poetry connects.”(10)
This is what my memorabilia revealed to me. The Brooke Bond prose of Tunnicliffe was poetry to me as a young boy, It set me on a path, with many sidetracks to explore on the way. Travelling along it has taken me to myriad places and encounters; human, literary, musical and creative.
“We are all islands in the sea, separate but connected in the deep.”
How true this is hit home even more earlier this year. Our daughter was travelling and exploring South America. She knew I would want to hear of any exotic bird sightings so deep from within the continent she compiled a list of birds she had seen. I checked them out in my second childhood bird book, none other than ‘Tropical Birds, Brooke Bond Picture Cards illustrated and described by C F Tunnicliffe R. A. I e mailed her with Tunnicliffe’s descriptions of four of her sightings and my observations.

King Condor – “Like other Condors it has amazing eyesight…. no sick or stricken animal escapes its keen eyes…soaring and circling high in the sky.” From the pic this grey and black massive bird must have been quite a sight.
Scarlet Macaw – “This gorgeous parrot feeds on fruit and fills the forest with harsh calls, retiring to deep shade when the sun is high.”
Blue Grey Tanager – ‘This beautiful tanager stays with its mate all year… during incubation the male provides the female with food and helps feed the nestlings”. The perfect couple.
Cock of the Rock – “Lively and vivacious they indulge in strange dances on the forest floor in which as many as twenty birds will congregate.” Wow sounds like jungle clubbing for birds and you’ve seen them!

She replied: “ that’s so cool you are using the cards you collected with Granny all those years ago to look up birds I am seeing now. It proves there is a lot of merit in collecting things”. She then added a bit of ornithological info. “ The Cocks of the Rock are known as the chickens of the jungle, they fly like chickens with no soft landings!”

Fifty five years,then, bridged by a childhood collection,stretching across the Atlantic. More proof of that ‘deep connection’.