In a recent book review, Alex Preston made this observation of the work:(1)

“here there’s a rigorous honesty about the disappointment that so often lies at the heart of nature watching (and makes all the sweeter our fleeting successes.”)

There is a lot of truth in this remark as I’ve discovered during some recent cycle rides and walks. It’s not disappointments I want to share though but the ‘sweet, fleeting successes ‘ that can occur quite unexpectedly when one is out and about.
On Tuesday June 27th I set out on my mountain bike to explore new territory, the Calroust burn valley in the Cheviot foothills. It runs from the confluence of the burn with the river Bowmont back up into the hills to its source near the Roman road of Dere Street. Beyond Calroust farm it became apparent that the valley had been the recipient of some infrastructural investment. The rough track had been resurfaced with pebbles . On either side hi-tech pheasant rearing enclosures had been made and in the valley floor the burn dammed to make ponds. A new fisherman’s lodge stood alongside. It all made for an interesting, testing rough road ride. At the head of the valley I lunched by the cairn on Dere Street and enjoyed sweeping vista all around from Windy Gyle, the Cheviot to the Schill.

As I remounted to leave I looked behind me. There at the road end was a another newly built ‘bothy’ type structure. Closer inspection revealed it to be none other than the ‘Calroust Arms’ , surely the most remote pub in Britain and presumably there for shooting parties. It takes all sorts! Novel and fleeting though this discovery was, it was not the ‘fleeting moment’ I am keen to report.
It was a terrific downhill run back down to Calroust farm. Just beyond I slowed down. Above the Wondrum hill skyline to my left a shape caught my eye; a Buzzard? No it was too elongated, too slender, its flight too leisurely. I unpacked the binoculars and took a closer look. No doubt. My recent mid Wales induction told me in an instant that it was a red kite. It floated above the moor, V shaped tail clear as day. It was my first ever sighting here in the Borders. A call to the R.S.P.B confirmed that recent recolonisation efforts in the north of England had seen birds beginning to venture further and spill over the border. I hope the pheasant shooting syndicate knows that they are harmless scavengers and are no threat to their game.

On July 5th a sighting of a completely different kind came my way courtesy of Charlie, our son Joe’s black labrador dog whom we were looking after. On this occasion the picture below begins to tell the story.

Charlie’s love of the water had taken us through thickets of gorse and broom to the hidden river Bowmont beyond. Earlier high water had left vast deposits of gravel at the waterside. Over the summer embedded seeds had sprung into life in an act of spontaneous re-wilding providing an early morning scene of unexpected brilliance. 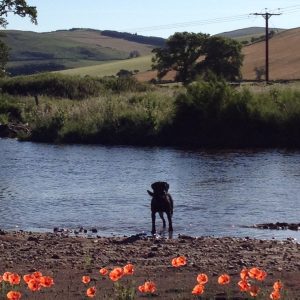 Charlie beside the Bowmont amongst poppies