1.
The year’s shortest day saw me at Budle Bay just north of Bamburgh in Northumberland . It is a favourite place. The small estuary with its inlets and mud flats can be scanned from the adjacent layby so, depending on the tide, mud or water and the bird life these attract are just a few yards away. As I set up my telescope for an even closer look lyrics and tunes from a way back 1978 came into my mind. No surprise really as to the record, as its composer heralded from just down the road in Newcastle. It was Mark Knopfler, with his first Dire Straits album and the songs “Water of love’ and ‘Down to the Waterline’ which drifted my way from over Budle Bay;
“let’s go down to the waterline…..flats all around me sky up above. I need a little water of love.”
And there I was with the tide out, the exposed mud flats , glistening in the winter sun. I certainly felt fully ‘attuned.’

Just in front of me a large group of wigeon were dabbling in the watery, dimpled mud. The telescope revealed their plumage in all its subtle glory, dusky pink, soft slate grey, gold head stripe and shiny, black tipped bills. Two shoveller ducks were nearby, busy ’shovelling’ their way through the liquid mud with their purpose built bills. Then far out beyond the bay over Holy island a shimmer of light lifted my gaze upwards into the clear blue sky. No sooner had it appeared, the light burst disappeared, was ‘switched off.’ “What could it be”? Binoculars solved the mystery. Hundreds of lapwings, the largest flock I had ever seen, were up aloft and on the move, coming my way. Their undulating wing beats, dark on top, white underneath were alternately and repeatedly caught by the sun . The resultant rhythmic, pulsating motion created an on – off strobe like light show.

The ticker tape shimmer slowly descended onto the mud of the shadowed bay and was dulled. Not for long. Sun burst through the clouds, illuminating the lapwing throng, and transformed the massed dark backs into a green sheen spread over the sparkling mud.

It had been a good afternoon’s birdwatching on the watery margins of Lindisfarne, so much so that on my drive home I wondered what my other ‘waterline’ habitats were harbouring this late December? In between seasonal activities I thought I would find out. 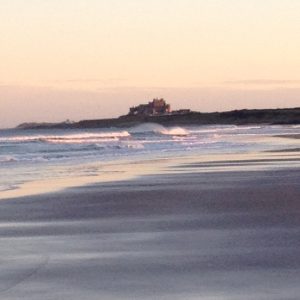 2.
There was no afternoon sunshine at Yetholm loch to greet me when I arrived at the hide. Still, my customary flask of tea kept me warm as the remnants of Storm Barbara blew themselves out over the whipped up water. Out in the middle, bobbing on the wavelets, the pure white of the goldeneye and mute swans stood out. The action on this particular day, however, was much nearer the shore. Fifteen male mallard congregated at the edge of the reed bed. They appeared to be playing a sort of ‘follow my leader’ game, swimming around, line astern, in never ending circles. Were they really in spring like mode here in midwinter trying to impress the solitary female in their company? Certainly the males looked the part, the green sheen of this particular waterline day all theirs when the intermittent sun light shone on their assembled heads and necks.

Yetholm pond provided yet more duck sightings. From the shelter of ‘leafy lane’ my telescope picked out fourteen teal, eight males and six females. All were busy, active, quacking, almost pirouetting on the water in tight circular swims, their yellow sterns alight in the gloom.Peterson et al, in their classic field guide, observed the same and evocatively summed it up as a :
“pleasant chuckling chorus like a child’s toy squeaker.”
Much less visible and vocal were a group of snipe perched on the mud at the far end of the pond. Their brown and black streaked plumage blended perfectly against the backcloth of the bank side vegetation. Occasional flights flickered their plumage whites into view but only briefly as they quickly resumed their statuesque poses on the waterline.

Beyond the pond down by the river nothing was stirring, just the water running fast between huge mounds of gravel and sand heaped up and deposited by recent torrents. I stood at the site of bygone camps and listened to the rapids rolling and tumbling along. Over the years it has become a familiar scene and I recalled words I had written on October 25th 1982:
“A dipper’s river this, fast , clear,and shallow, with grassy banks and brambles too.” A couple of years later I was a bit more forthcoming:
“A river in flood is dipper brown
Rolling along in flecks of dipper white.

And all in all it was a ‘dipper’ only day
For beneath a heron grey sky
Only his jangled whistle
Cut through the churning,
Only his arrow flight
Moved above the rush and swirly motion.”

While those past years resurfaced I was very heartened to be greeted once again by a dipper fly past ; dark bellied, white chested with a song that bubbled along just as loud or as quiet as the water itself. Another “dipper only day” to savour and be thankful for.

Back at Innisfree our own watery mini kingdom,as always, has proved to be attractive to birds. A solitary mallard once appeared and a moorhen too while a heron is a frequent visitor. In general though this bit of water is a bathing and drinking place for garden birds. On this particular end of year day four blackbirds, a gaggle of starlings, a wren, goldfinches and coal tits were all splashing in the margins. It was as if they had all answered a call to “get down to the waterline”.

I had too over a few days. Their splashing about picturesquely concluded my own aquatic sojourning.