Back in October last year our garden ‘armageddon’ ( see earlier post) descended on Innisfree. Recovery began the following week with an eye on the coming year. Much planting of bulbs, corms, wallflowers and forget me nots took place. Has it come to fruition? Well so far so good. The crocuses planted in the lawn were a picture earlier in March, perky and vibrant on some dry sunny days. They marked a major moving on from that armageddon of severe all round garden pruning. 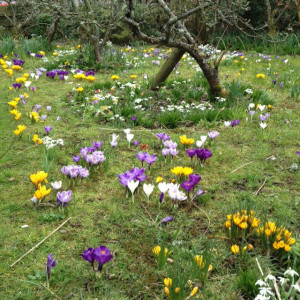 Elsewhere other garden inhabitants added to the air of optimistic re birth. Twenty frogs came and left huge mounds of spawn in the pond. Under siege everywhere, they more than ever deserved maximum protection so I strung netting over the pond margins to deter our visiting heron. As they croaked contentedly, blue tits began to explore their nest box and starlings chattered away near their new intended home. Last year’s plans had then moved begun to materialise auspiciously. What of the other things planted back in October, the anemone de caen, and lily of the valley? Time will tell, though we can await with optimism for as John Clare observed many times:
“spring comes anew and brings each little pledge” (1.)
A host of new plant pledges were set out on March 21st. They are listed below so that over the coming months I can take a backward look and report on their progress.
1. 50 wildflower plug plants courtesy of Boston Plants Ltd. (including birds foot trefoil and lady’s bedstraw)
2. 4 ferns. from J. Parker Ltd ( matteucia, felix fern, scolopedrum, polyblepharum.
3. 6 auricula.
4. 2 standard roses from D. Austin. (silver jubilee, warm wishes)

Of course gardening is an endless story and this spring’s planting plans were extended following a visit to our daughter in Harrogate and its RHS Harlow Carr gardens. The town itself was resplendently decked with crocuses and the garden alive with winter colour. 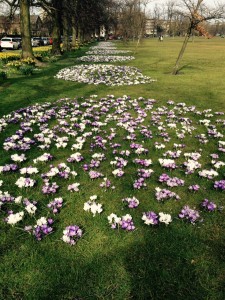 Our day out brought back some memories. When I was busy reclaiming wasteland and making a vegetable garden back in 1983 I contacted the RHS at Harlow Carr for advice on what fruit bushes would be suitable for northern climes. Comprehensive advice followed and the following were planted.
1. blackberry- oregon thornless.
2. blackcurrant- mendip cross, baldwin, boskop giant, sea brook black
3. gooseberry- careless, lancashire lad.
The advice was spot on for they are all thriving today.

As we walked round Harlow Carr further reflection occurred when I spotted something familiar , a poem inscribed on a large stone set by the stream. It read:

“The kiss of the sun for pardon,
The song of the birds for mirth,
One is nearer God’s heart in a garden
Than anywhere else on earth”.

Here at Innisfree beside the pond is a plaque with the same poem on. It arrived here after sitting beside my parents pond in the garden at Gladstone Cottage, Combe in Oxfordshire. Gardening is home to endless stories.
As for the poem, I see it every day but never knew the author. Hence the sighting of it in different surroundings prompted some research. It was composed by Dorothy Frances Gurney who lived from 1858 to 1932.